International Communist and Workers' Parties in solidarity with the Communist Party, Turkey (KP) in the elections 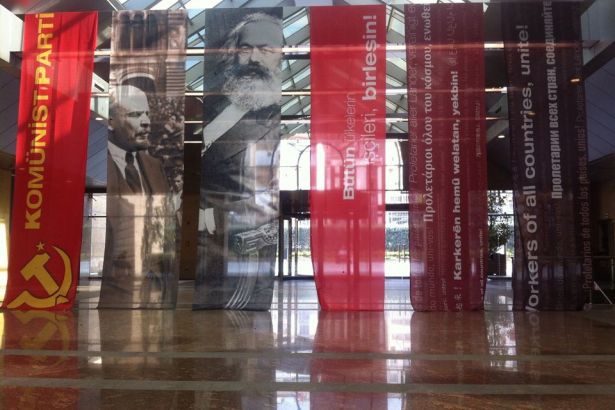 Participants of the 17th International Meeting of Communist and Workers' Parties (IMCWP) greeted communists of Turkey in their dedicated struggle for socialism in an electoral event.

Communist Party, Turkey (KP) held a meeting as the closing event of its election campaign at a convention centre in Haliç, İstanbul. Last month KP released a statement on the general elections, calling the people to have faith in socialism. (See the link for the story at ICP)

As the host, KP invited the IMCWP participants to its electoral event. Most of the participants joined this event to greet the communists of Turkey. The Communist and Workers' Parties declared their support for the KP in the elections with a solidarity note. 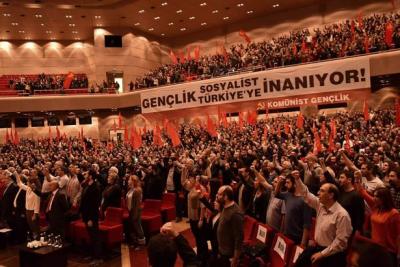 The electoral event of KP opened with the speech of the Secretary of CC, Kemal Okuyan.

The Secretary also addressed the participants of the 17th IMCWP by saying:

"Comrades who are present here for attending the 17th IMWCP, I would like to greet you as well. You too, have faith in the working people of this country, which is defiled by dictators, civil fascist gangs and Islamist murderers. Do not worry about how all that filth and all that blood will be cleansed in this great country.

Just have faith in the strength of the organized people.

We believe in the working class, working people, and socialism. Others believe in fairy tales."

At the event, General Secretary of the Communist Party of Greece (KKE), Dimitris Koutsoumpas, saluted the participants. Relaying the greetings of the Central Committee of the KKE to the KP and working class of Turkey, Koutsoumbas expressed KKE’s support for the families of the victims of the Ankara massacre.

Koutsoumpas also mentioned the difference between bourgeois parties such as liberal or social-democratic parties and the communist parties. KKE leader stressed that the communist parties have their own separate base; “defending the interests of the working class, struggling to overcome capitalism and for the construction of the socialist-communist society.”

Underlining the strong bond between the KKE and the KP, the General Secretary stated that the possibility of war caused by “intense inter-imperialist competition over the control of the hydrocarbons and their transport routes” and the region’s strategic importance as a passage for the Middle East, North Africa and the Balkans are the main challenges in the region in which both parties are waging struggle.

Youssef started his words by condemning the hypocrite imperialists who created the Islamic State and the other dark forces in the Middle East, adding that the dangerous games of NATO and its servants form a threat for the people of Turkey as well as Syria.

CC member of the Syrian Communist Party quoted the words of Ahmad Bakdash:

"The only power which does not surrender the invaders is the power of the people".

Youssef concluded his speech as follows:

"We do not give up our class struggle while fighting the outsider enemies.

My comrades of the Communist Party, Turkey, all the way through the Socialist Revolution!

The victory will belong to the Palestinian people struggling against Zionism.

The victory will belong to the people of Yemen against Saudi's,

The victory will belong to the people of Iraq resisting invaders and terrorists,

Eternity is for our martyrs.

The victory belongs to all the people resisting.

I repeat: Syria will not surrender!

Long live the internationalist movement of the working class"

The event ended with performances of the communist artists singing songs of people in Spanish, Russian and Arabic well as Turkish. The international songs performed at the event were as follows: