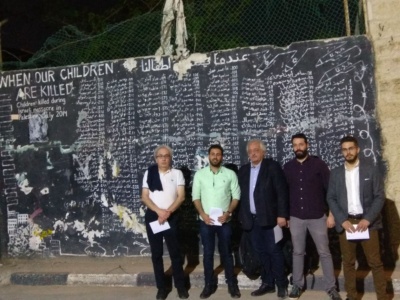 A delegation of the Communist and Worker’s Parties that constitute the European Communist Initiative visited Palestine and the West Bank as a solidarity mission.

Meeting with the fraternal Parties of Palestine

The delegation had the opportunity to meet with the fraternal parties in Palestine, the Palestinian Communist Party and the Palestinian People’s Party and exchange views with them. The ECI delegation informed the Palestinian parties for the developments in Europe and in the EU, communicated its concern regarding the accentuation of the interimperialist competitions and confrontations in the Eastern Mediterranean and North Africa regions, centered on the continuing military operations of Turkey in Syria and on the confrontations for the control of the hydrocarbon reserves of the marine region of Cyprus-Lebanon-Israel. The ECI delegation highlighted the dangerous position of the European Union in the Palestinian Issue, its tactics of “equal distances” between Palestine and Israel that identifies the victim with the culprit and stressed that even though there are 14 Parliaments of EU Member-States that have decided to fully recognize the State of Palestine, under various pretexts the governments do not apply these decisions. It informed on the particularly dangerous roles of the so-called “left governments”, such as of the Syriza-Anel government of Greece, that with the argument of “upgrading geoestrategically” the country seeks a very close cooperation in the political-financial-military level with the Israeli state, in the margins of various bilateral and multilateral agreements (eg., Greece-Cyprus-Israel) while at the same time assumes the role of “standard-bearer” of NATO and of the USA in the region.

The Palestinian Parties thanked the ECI delegation for the firm internationalist Solidarity towards the Palestinian people, for its support in the solution of the Palestinian Issue with the creation of an independent sovereign Palestinian State, for the condemnation of the unacceptable decision of the USA to recognize Jerusalem as Israel’s capital, for the combative denouncement of the Israeli occupation of Palestinian territories and for the liberation of all political prisoners. They noted especially the solidarity of the CP’s and of the Communist Youth Organizations to Ahed Tamimi, whose trial was occurring during the Solidarity Mission of the ECI in Palestine.

The delegation of the ECI committed itself to communicate to the Parties of the ECI the rich experience and the information gathered by the mission and to intensify the solidarity in all European countries so that the State of Palestine is recognized, so that the Israeli occupation is condemned, supporting the solution of the Palestinian Issue with a creation of an Independent Palestinian State in the 1967 borders with its capital in Eastern Jerusalem, for the rest of the demands contained in ECI’s Memorandum in support of the just struggle of the Palestinian People.

During its stay in the West Bank, the ECI delegation had the opportunity to visit Ramallah, Hebron, Bethlehem and the Aida Refugee Camp. In these cities the delegation had contacts with members of Parliament, members of city councils and refugees and was informed for the continuous and daily provocations suffered by the Palestinian people from the settlers and from the Israeli armed forces, having to pass from dozens of military checkpoints in order to enter or leave their towns and villages.

In the Aida Refugee Camp in Bethlehem, the delegation was informed of the severe insufficiencies of the United Nations Structures (UNWRA) to give solutions to the refugee housing problem, having reached after 67 years 5000 refugees in a space with provisions for 1500. The placing of the Refugee Camp next to the “wall of shame” that “cuts” into the neighborhoods of Bethlehem and incorporates an Israeli military base at that specific point, puts the refugees at continuous risk of provocations and attacks. According to UN sources, Aida refugee camp is “bombarded” with tear-gas over the wall 4 times per week, every week. These confrontations frequently escalate into apprehensions of young people, and on October 2015 13-year-old Aboud Shadi was killed by Israeli sharpshooters inside the Refugee Camp.