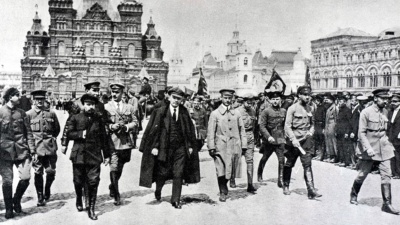 Statement of the Secretariat of the European Communist Initiative on the occasion of the 99th Anniversary of the Great October Socialist Revolution.

Secretariat of the European Communist Initiative released a statement on the occasion of the 99th Anniversary of the Great October Socialist Revolution:

Socialism is necessary and timely

99 years ago, 7 November 1917, the Great October Socialist Revolution triumphed. We honor the memory of the Paris Commune. We honor and we are inspired by Marx, Engels, Lenin who guided the workers´ struggle for the socialist future documenting scientifically how to reach that goal.

What does the Great October mean for us, living in the 21st century?

1. The Great October showed to the whole of humankind that people can choose the socio-economic system that serves their interests, that capitalism is not the peak of human history; capitalism is moribund and cannot be repaired. It creates wars, exploitation, poverty, misery, unemployment, refugees. Humankind has another alternative, socialism.

2. The Great October demonstrated that people should take their fate into their own hands if they want to fundamentally change their lives. Capitalism is a society where capitalists own the means of production. The working class, the people are exploited for the profits of the capitalist class.

3. The Great October was the revolution of the workers and other working masses. It represented a deep change in society, a social revolution.

4. The Great October showed that workers and working masses can win only if they are guided by communist parties with revolutionary strategy. 99 years have passed since 1917 and demonstrate that the communists aim to overthrow capitalism for socialism. The bourgeois liberals, the social democrats, the opportunists want to manage capitalist barbarity.

5. The Great October showed that without organized, disciplined Marxist-Leninist parties with a strategy that aims to overthrow bourgeois power, the working class, the people cannot win.

6. The Great October of 1917 demonstrated that capitalism can be defeated. It opened the epoch of socialist revolutions. The Soviet Republics in Hungary, Slovakia, Bavaria in 1919, the socialist revolutions that followed, demonstrated that the socialist revolution is not an isolated Russian phenomenon but it is the common aspiration of the workers in many countries. The Great October gave impulse in the 1920's to the birth of communist parties in Europe and all over the world, whose contribution has been significant in the victories of the peoples in the capitalist countries. The bourgeois classes made concessions under the pressure of the socialist states, concessions that nowadays are being abolished one by one.
It was capitalism which led to World War II. It was the socialist Soviet Union that made the greatest contribution to the great peoples´ anti-fascist victory. After the Second World War, states in Eastern and Central Europe, Asia, Latin America followed the socialist road.
Despite the setback, the counterrevolution, our epoch is the epoch of the transition from capitalism to socialism. There have been successes and failures, high tides and low tides of revolutions but it will inevitably lead to the global victory of socialism.

7. Capitalism cannot solve the problems of humankind. The development of science and technology would allow the creation of a good life for billions of people but capitalism is an obstacle to it. Socialism is an actual task.
Socialism, despite its weaknesses, solved basic problems such as work for all, free education and healthcare, safety for the future etc., that still afflict people under capitalism, even after decades. Socialism did not fail as various apologists of capitalism claim. The value of observing the laws of socialist construction was confirmed. Despite the lies, the anti-communist distortions, the anti-socialist propaganda, the falsification of history that in Europe is led by the bourgeois governments and the EU, the peoples and especially young people who have not known socialism can search for the historical truth and play a leading role in the development of the class struggle against their exploiters and the capitalist system.

8. The Great October confirmed that socialism is the social system where political power is in the hands of the working class in a scientifically planned economy which aims to satisfy people’s needs, and is not ruled by the anarchy of the market economy, competition and capitalist barbarity.

***
In 2017 we will witness the 100th Anniversary of the Great October Socialist Revolution. Let us celebrate together this outstanding event for the working class all over the world which had a decisive influence on the world and opened new perspectives for the international labour movement.
Let us strengthen the revolutionary unity of the communists of the world, millions and millions of working people who fight against the power of the monopolies, who fight for the formation of the alliance of the working class and the poor popular strata for the overthrow of the system of exploitation of man by man, for the new world, for socialism-communism!