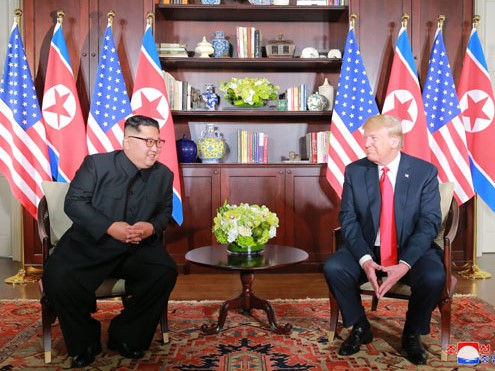 Following the summit of Kim Jong Un and Donald Trump, the Workers' Party of Korea and the Party for Socialism and Liberation from USA issued comments on the summit.
ICP, 13 June 2018
On June 12, DPRK leader and chairman of the Workers' Party of Korea (WPK) Kim Jong Un met with U.S. President Donal Trump in Singapore in order to carry out the first summit between the two countries. According to Rodong Sinmun, the organ of the CC of the WPK, the two leaders had a candid exchange of views for putting an end to the decades-long hostile relations between the two countries and for building a permanent and durable peace mechanism on the Korean Peninsula. The joint statement signed by the two leaders at the end of the talks prescribes the following points:

1. The DPRK and the United States commit to establish new DPRK-U.S. relations in accordance with the desire of the peoples of the two countries for peace and prosperity.

2. The DPRK and the United States will join their efforts to build a lasting and stable peace regime on the Korean Peninsula.

3. Reaffirming the April 27, 2018 Panmunjom Declaration, the DPRK commits to work toward complete denuclearization of the Korean Peninsula.

4. The DPRK and the United States commit to recovering POW/MIA remains, including the immediate repatriation of those already identified.

As to the political background of the summit on behalf of the U.S. side, Brian Becker's article appeared on Liberation, newspaper of the Party for Socialism and Liberation (PSL), raises interesting points. Becker claims that key sector of the U.S. ruling class establishment has negative aspirations towards a peace with the DPRK. It is noted that the DPRK insists on being treated as an equal in negotiations, wants a peace treaty finally ending the Korean War, a normalization of relations with the United States and a lifting of economic sanctions. According to the article, the DPRK's expectation of a step by step, synchronized and reciprocal approach does not mean that she will surrender to unilateral U.S. demands designed to sabotage, not facilitate, any substantial agreement or a normalization of relations. Concerning the “Comprehensive, Verifiable, Irreversible Denuclearization” demand expressed by the larger Pentagon establishment of generals and admirals and most of the U.S. ruling class, Becker advises to treat the nuclear policy of the U.S at first.