Communist and Workers' Parties to meet in Izmir, Turkey 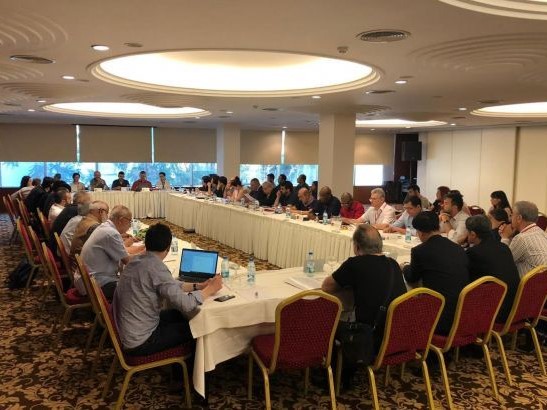 The 21st IMCWP will take place in Izmir, Turkey, co-hosted by TKP and KKE.

On a warm summer day with a cool breeze blowing gently from the Aegean shore, cars were shuttling between the hotel and the airport. Each vehicle had a couple of attendants, one Turkish and one Greek, greeting the representatives from various countries, who were arriving to attend a meeting that would take place on the next day, the 8th of June. It was reminiscent of Izmir of a century ago - an ancient and prosperous trade city of the East Mediterranean, mostly populated by Greeks and Turks.

A century ago, Greek forces had invaded Izmir, part of the then Ottoman Empire, due to the turbulent scene of international politics in a world in chaos following the Great War. The victorious imperialist forces were trying to share the spoils of war, which, in their eyes, was basically the rest of the world, while the real sufferers of the war independent of their home country, the working class, was increasing its resistance against the destruction nobody could have ever anticipated before. The culmination of the struggle was the October Revolution of 1917 in Russia, which gave way to the foundation of the Communist International in 1919, exactly a century ago.

The newly-born Communist Party of Greece stood up against the invasion of Anatolia, its militants in the ranks of the army refusing to shoot bullets against Turkish workers. It was a clear remark of the aim of the Communist International - working class internationalism, solidarity of the toiling people, and the refusal of nationalism.

A lot has changed in a hundred years, but the spirit of internationalism was similarly alive in Izmir the past weekend. Communists from Greece and Turkey were helping with the logistics of the meeting of the Working Group of the International Meeting of the Communist and Workers Parties Meeting (IMCWP), the regulatory group responsible for the preparation of the annual meeting. 38 representatives from 25 parties from around the world gathered to prepare for the 21st IMCWP and to discuss other issues on the agenda of the world communist movement.

The legacy of the Communist International was interrupted with the dissolution of the Soviet Union and the Socialist Bloc at the beginning of the 1990s. For several years, the communist movement around the world was in disarray, many being liquidated or transforming into liberal and/or social democratic parties, and others working to maintain the Marxist-Leninist political struggle intact under overwhelmingly difficult circumstances.

When KKE took the initiative for the world communist movement to meet once again in 1998, it was not the same as the foundation of the Communist International, but it was a quite significant step for dozens of communist parties from different countries and continents. Solidnet, a network of communist and workers parties was founded, and to this day serves as the main platform for the parties to share information on their struggle.

This year, the 21st IMCWP will be held. The representatives decided that this year’s meeting should be co-hosted by the KKE and the TKP and take place in Izmir, Turkey. Honoring the centenary, the theme of the meeting will be “100th Anniversary of the founding of the Communist International: The fight for peace and socialism continues!” The exact date of the meeting is to be announced.

The parties represented in the Working Group shared information and opinions on the political developments in their countries and the world. “This is a critical moment for the world,'' said Kemal Okuyan, the General Secretary of the TKP, in his opening speech of the meeting, “The imperialist aggression, the threats of racism, of new imperialist wars, the ongoing regional conflicts, the aggression against the working people, the anticommunism… We represent the other side of this picture, the resistance of the working class. But we should remember that resistance is not limited to resisting the aggression, it is also about the perspective to build a better world.”

The Working Group handled several items about the preparation and organization of the IMCWP, taking all decisions unanimously. The representatives also agreed to call for joint actions on four topics: The resistance of the Sudanese people against the military junta, to which the army responds with massacres; solidarity with the Syrian people who have been struggling heroically against the imperialist invasion; standing up against the anticommunist witch-hunt that is taking place in Poland against the Communist Party of Poland and the alarming increase of the military build-up of the US forces in the Persian Gulf, which hints at a war against Iran, possibly turning into a region-wide conflict, which will result in tragedy for all the people in the Middle East.