The 17th IMCWP: 'Common action against imperialism and fascism by raising up socialism' 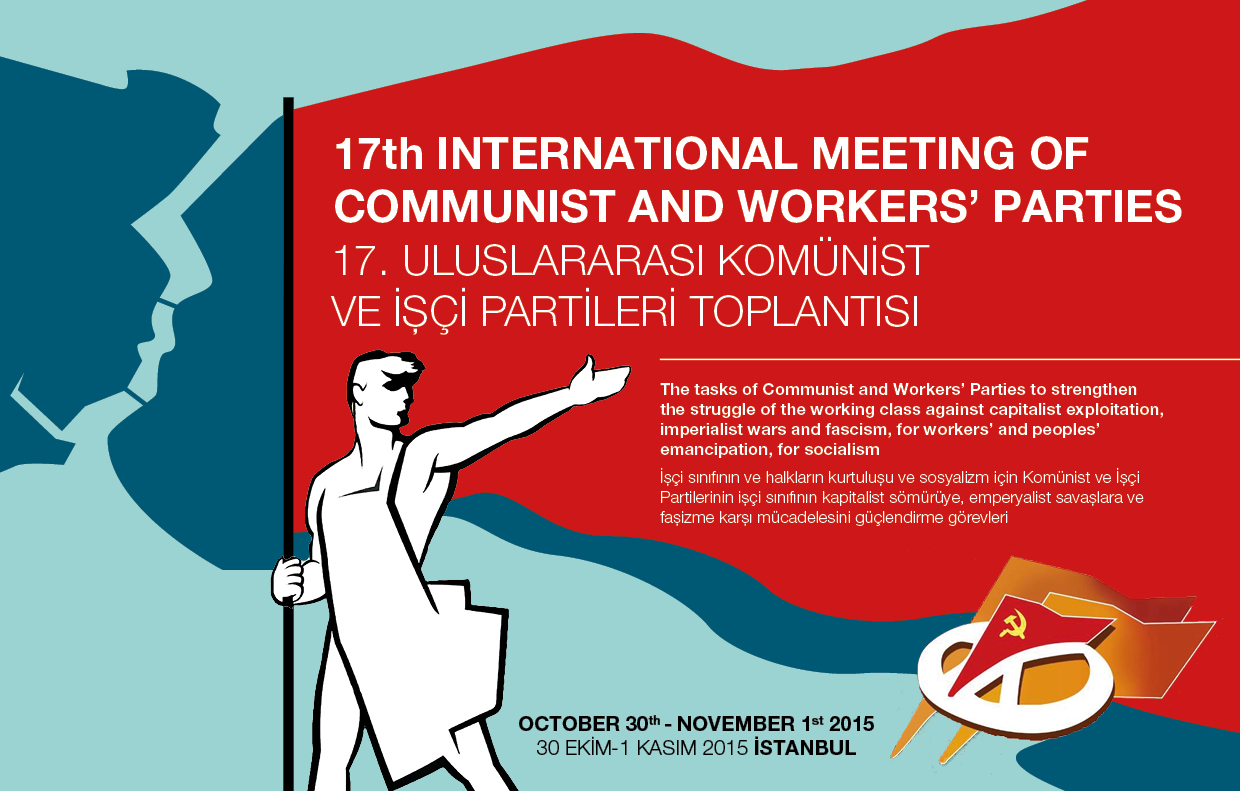 The Communist Party, Turkey (KP)'s press release after the 17th International Meeting of Communist and Workers' Parties in İstanbul on November 1st.

The Press Release of KP is as follows:

"Press release of Communist Party, Turkey on the International Meeting of Communist and Workers' Parties in Istanbul (30 October-01 November 2015)

The 17th International Meeting of Communist and Workers Parties has been successfully held in Istanbul on the topic "The tasks of Communist and Workers’ Parties to strengthen the struggle of the working class against capitalist exploitation, imperialist wars and fascism, for workers’ and peoples’ emancipation, for socialism".
The meeting was attended by 104 delegates, representing 58 communist and workers' parties from 48 countries. 6 parties could not attend the meeting against their wishes but sent their greetings and written contributions.
After the extraordinary meeting in Damascus and the 14th meeting in Beirut, it was the third of IMCWP meetings held in a Middle East country, Asia Minor being the junction point of unique spheres of political class struggle. The meeting took place during the heydays of the parliamentary elections in Turkey, in which the hosting Communist Party, Turkey, took part, under the intense oppression of the government,.
The meeting provided an opportunity for an exchange of opinions and information on the latest developments of imperialist restructuring, escalation of fascist movements in different regions and the quest for emancipation opening up opportunities for a vigorous working class struggle. The perspective to develop joint and convergent action was shared.

The parties that attended the meeting gave information on their activities and the progress of communist movement in their countries. The speakers expressed their concern towards the escalating prohibitions, persecutions and discrimination against Communist Parties and communists.

The responsibility of the communist and workers’ parties to strengthen the working class struggle in regions under imperialist threat and intervention was underlined. Likewise stressed was the concern about rivalries among capitalist powers, aggravated by their regional collaborators. The dangers posed by militarization and the concern to fortify anti-imperialism in such regions of competition was expressed.

The refugee crisis came to the agenda and the need for promoting not only internationalist solidarity but also class consciousness against discrimination policies and abortive patronage policies was pointed put.
Due to the restructuring of capitalism exhausted by crisis and the restoration of imperialism in regions of vacuum, the meeting drew attention to the rise of erroneous expectations of reforming the capitalist order in favour of people's and of establishing peace under the patronage of imperialism.
The timeliness and urgent necessity for promoting socialism was resolved as the sole answer for the quest of peoples against barbarism and impoverishment. There was a confirmation on breaking away from the hegemonic capitalist modus vivendi.
The particular importance of orienting patriotic resistances against military aggression and popular struggles against austerity measures towards a class confrontation was pointed out. This was reiterated with the emphasis to mobilize the working class in order to lead these struggles towards socialism.
Coordinating communist and workers' parties' struggles on all these issues in order to stir up the class movement on a revolutionary basis was highlighted.
Participants saluted the struggle of the peoples in Latin America and the central role of communists in these struggles for independence and socialism strengthening the anti-imperialist and progressive forces of the region. The solidarity with Cuba and its socialist revolution, as well as with the Venezuelan people and their Bolivarian revolution was reasserted.
The meeting assessed the struggle of the European peoples against their governments’ imperialist policies and domestic exploitation of workers and enslavement of migrants. The determination of the working class in Greece to reject subordination to the blackmail of EU, ECB, IMF including the rejection of negotiations with the Troika was valued. The election results in Greece and Portugal for the communists were hailed, qualified as hopeful and encouraging.
The consequences of intercontinental confrontations and alliances between imperialist centers were dealt by the participants. NATO’s intention to open new military bases in Hungary and Slovakia and Russia’s interventionist policy towards Syria, beside the confrontation in Ukraine, emerge as a change in power balances, both paving the way for a reinforced anti-imperialist struggle and also increasing the precision of communists to keep independent from mainstream power politics. Fascist paramilitary forces are deliberately backed by liberal governments, shifting the context of struggle to identity politics and stimulating the dilemma of cosmopolitanism and nationalism which pushes back the internationalist stance of the working class. On the other hand, the Trans-Pacific Partnership (TPP) and Transatlantic Trade and Investment Partnership (TTIP) negotiations, which will provide a basis for a new wave of attacks on the working classes, was called to attention and taken as an agenda of struggle for the forthcoming period.
The dual threat in the Middle East and North Africa caused by the jihadists and the Israeli state was confirmed, both corresponding to a de facto coalition against secular and patriotic forces. Not only ISIS but also other Islamic reactionary groups, notably the components of the FSA in Syria, have a counter-revolutionary character and their role in legitimizing military interventions has to be deciphered. The Gulf states’ support for these jihadist groups and Saudi Arabia’s assault in Yemen was vigorously condemned as well as the threat posed by the Israeli state towards Syria. More revolting is the increasing attacks of Israel to the Palestinian people, bombing residential areas, carrying out arrests. The meeting declared its solidarity with the people resisting these attacks, particularly in Palestine and in Syria, calling for a uncompromising struggle against imperialism and fundamentalism.
The growing need to strengthen the ideological struggle against the infiltration of bourgeois ideology within the ranks of communist movement had been stressed in the previous communist and workers' parties' meetings. The current meeting updated the facts and warnings. The artificial revival of social democracy nourished by populism, narrowing the opposition to neo-liberal policies, obsolete dictatorships and military aggression sets a trap for the communist movement rendering the class struggle blind against the real sources of these attacks. While it is imperative to challenge all efforts to criminalize communists and condemn their historical legitimacy, there is a further need to demarcate the revolutionary and class based line of the communist and workers’ parties from the conformist and opportunist tendencies within heterogeneous opposition movements focused on mutant aspects of contemporary capitalism.
During the three-day meeting, the participant parties had the opportunity to develop their bilateral relations, to contact other parties and to exchange views.
We believe that the international meeting contributed to the consolidation of the communist and workers' parties' policies in triggering the working class movement in each country and will initiate their common action against imperialism, fascism by raising up socialism as the concrete solution for emancipation.
The meeting's issues of action were adopted by the parties as guidelines to be implemented, materialised and to be monitored by the Working Group until the 18th IMCWP meeting."