'Youth in contact with the KKE: Earthquakes that are to come' 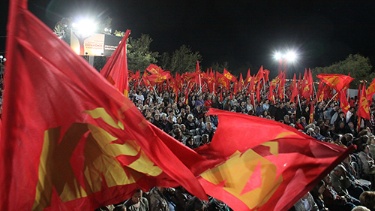 Dimitris Koutsoumpas, GS of the CC of the KKE addressed the three-day long 42nd Festival of the KNE at the political rally-climax of the events.

The 42nd Festival of the Communist Youth of Greece (KNE) were held  with the participation of 32 youth organizations between 22nd and 24th of September in Athens. This year, KNE’s festival also traveled to dozens of Greek towns with similar mass events, was completed in Athens with a political rally. At the political rally-climax of the festival on 24th September,  Dimitris Koutsoumpas, GS of the CC of the KKE addressed the masses as the main speaker. Sitaram Yechury, GS of the CC of the CP of India (Marxist) and the Secretary of the CC of KNE, Nikos Ambatielos, also addressed the meeting.

Koutsoumpas began his speech by referring to the importance of the Festival, since amongst other things it brings thousands of young people into contact with the history of the KKE and labour movement. «They find about the activity of the previous generation of fighters, they are inspired, they make a decision to take their place in the organized struggles, they take up the baton for the great battles that we have in front of us, for the “earthquakes that are to come” said the GS and added:

"The history of the KKE, the conclusions that we draw for the strategy of the party are weapons in the complex daily and demanding struggles against the system of exploitation. In the great cause of the fight for socialism- communism."

The GS pointed out that "while the Communist Parties had socialism – communism as a goal in their program, they actually always put an intermediate stage before it for the maturation of the revolutionary forces, (and) this strategy resulted in some Communist Parties not meeting their duty, when the conditions of a generalized economic crisis were expressed in their countries that led to a generalized imperialist war and after that a revolutionary situation."

The GS of the CC of the KKE also referred to the political developments in Greece and stressed that “SYRIZA was chosen to do the dirty work on behalf of the capital and the EU, because at least in this phase, it is able to deceive and manipulate people easier than the traditional bourgeois political forces".

D. Koutsoumpas underscored amongst other things the future of KKE's struggle path by saying: “Today we are more capable, armed with our party's program, the conclusions of the study of our party's history, the experience drawn from socialist construction, to shed light on the duties our party has in the years to come… Marching towards the 20th Congress, we set a goal for an all-round reinforcement of the KKE, to meet the needs for the immediate regroupment of the labor movement, the development of the social alliance in an anti-capitalist, anti-monopoly direction, for the struggle against the imperialist war, for working class power.”

For the full speech of Dimitris Koutsoumpas see the link.