'We will stand against the imperialist politics of the European Union' 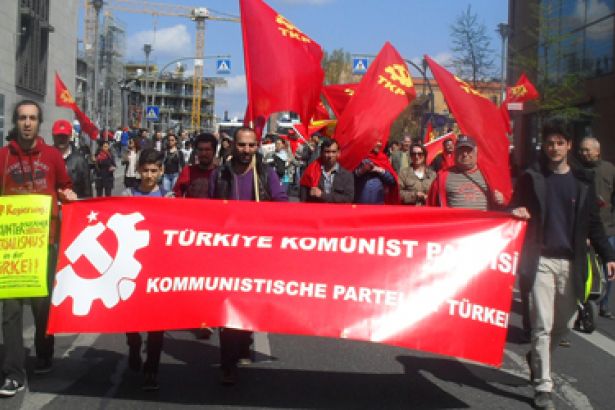 Statement from the Communist Party of Turkey's (TKP) branch in Germany upon tension between Germany and the AKP of Turkey.

Communist Party of Turkey's (TKP) unit in Germany published an open letter to the Turkish Working People who live in the Federal Republic of Germany concerning the tension between Germany and AKP of Turkey.

The letter of the TKP unit in Germany notes that the mandate wars between Germany and AKP have reached a harmful level for the working peoples of both countries and points out to the complicity of the German imperialism and AKP in the past. The letter underlines that both sides are still taking advantage of the situation by escalating xenophobia and making dirty negotiations on immigrants.
TKP unit in Germany calls working peoples of both countries to build in internationalist solidarity to refuse all kinds of efforts to create enmity among workers.
Below you can read the full version of the statement:

Ongoing mandate wars between Germany and AKP for some time past have reached dimensions that will harm Turkish and German people. Islamofascist AKP government have verged to betting for multiple balances due to the turn-backs of those who put AKP into power and supported it. The political gang under the domination of Erdogan, who is anxious about whitewashing the crimes he committed and extending his life, proved that they are not lagging behind embarking on inappropriate provocations.
Deep poverty and migration due to capitalist exploitation and imperialist aggression hit European metropoles one way or another. Because of this exploitation and aggression, population movements resembling a veritable pre-history migration of tribes while Mediterranean Region has turned into a grave of immigrants.
Those who somehow managed to slip through the hands of imperialist barbarity are treated in proportion to their “utility”, as if their exposure to a mean racism in Europe was not enough.
Given the situation, the imperialist powerhouse of Europe gained favor from human immigration after the war in Hindu Kush and Middle East of which they are a cause, beyond continuing its habit of using its money like a whip.
They tried to supply the deficit in the manpower needed by German capital with asylum-seekers and with this purpose they encouraged migration at the expense of irritating weaker elements in Europe.
When they received sufficient mass to meet their need for labor force, “the rest” were given the boot and a series of “programs” were implemented for that purpose.
Some asylum-seekers are forced to go back showing “danger of terror” as a reason; maneuvers to give Afghanistan, which is in the middle of a civil war, the statute of “secure country” statute were initiated; turn-back incentive funds in the form of almsgiving were put into place; “deterrence effect” was used by putting asylum-seekers and foreigners under pressure via racist and fascist organizations like PEGIDA, NPD and AfD.
Later on, they signed refugee agreements with Erdogan, who can be described as “the foul-spoken despot of Ankara” and tried to keep out excess population in exchange for money.
Erdogan’s desire to make refugees the object of blackmailing and the political practices of European imperialism towards energy resources and strategic regions are the results of the same greed.
The blackmailer AKP government uses people as an instrument for their brutal politics not only because of their asylum-seeker policies. With reference to the fact that more than three million working people live in Germany, they also want to use those people for their own self-seeking goals.
Turkish workers living in Germany are stuck between the loyalty demand of the German state and the situation of serving as a pawn to the AKP government.
And now they are trying to turn the working masses compressed between remaining loyal and serving as a pawn into enemies to each other due to differences of mother tongues and race, although they work in the same places.
Our working peoples cannot be the object of the showdown between the AKP government and the German imperialism.
Their mutual blackmails or mandate wars do not concern us at all!
Neither the pro-market, Islamist AKP government can represent the working people of Turkey, nor can the pioneers of the German imperialism trying to rule the world with a gripper of exploitation and offense can represent German workers.
The fact that the German imperialism wants to get rid of AKP does not mean they have their hearts in the right place for the Turkish society. Their aim is nothing but to maintain exploitation and to rule out possible elements of risk.
That is why:
In internationalist solidarity, we refuse all kinds of efforts to create enmity among workers.
The rising xenophobia can only be beaten off by the unity and solidarity of the working class.
We will not permit that the crisis between AKP and the German state be resolved by any “reconciliation” to the detriment of workers.
We will stand against the imperialist politics of the European Union.
We will forestall the use of Turkish workers as a pawn for the Islamist AKP’s self-seeking goals.
We will uncover any involvement in plans of the German imperialism for an “AKP without Erdogan”.