TKP’s statement on train crash: "We will go after these murders" 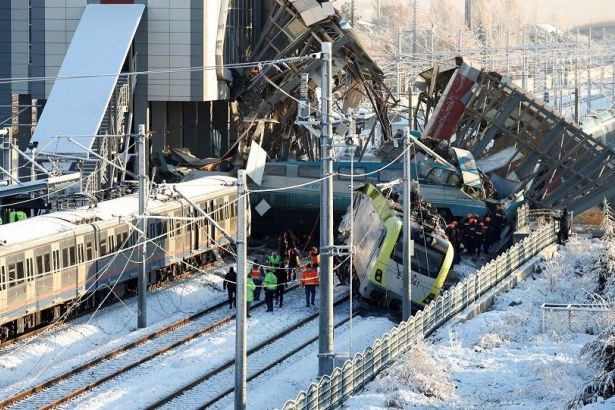 The Communist Party of Turkey (TKP) made a statement on the train crash on December 13 indicating to the push of greedy capitalists instead of a planned construction.

9 people died and 86 were wounded in a train crash in the capital city Ankara on December 13. As details of the event that was recorded as the 11th deadly train crash during the AKP government have emerged, negligence behind the crash has been revealed.

According to the news portal soL, the Central Committee of TKP said “People have been killed on the new railway routes that were not constructed with a good planning but with the push of greedy capitalists and Erdoğan’s orders”. Criticizing the government harshly, the statement made by the Communist Party of Turkey said that “you are killing our people; we will go after your crimes”.

The full statement is as follows:

Railways should be providing safe and convenient transportation. In Turkey, railway transportation became a tool of massacre in the hands of a science-hater, pretentious and anti-labor government. What happened today in Ankara is not an accident but murder. It is so as in other 10 train disasters happened within the last 15 years.

The measure taken by the government is to announce the number of deaths low and try to prevent the press to publish the news. In this case, as has been repeatedly done, the dead railway workers will be blamed; those who are responsible will try to make all these to be forgotten by appearing at the next opening.

We will not let you do this. We are going to go after these murders, ignorance, plunder, anti-labor policies. We are going to ask for answers because you are deceiving, exploiting, threatening and killing people because we are not going to leave this country to your darkness.

With this determination, we convey our condolences to the families of those who lost their lives in Ankara's railway murder and we hope that the injured will be recovered as soon as possible.