TKP: “We will breathe down bosses’ neck” 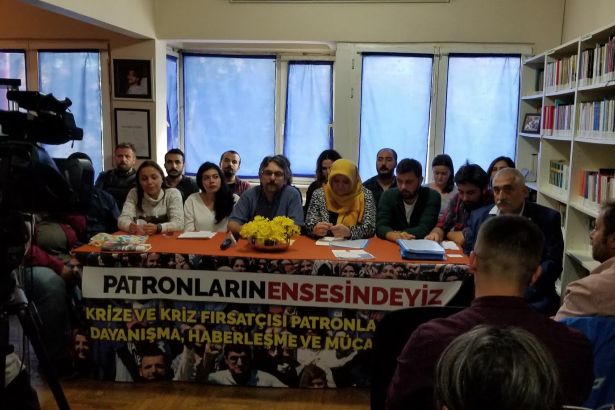 Communist Party of Turkey initiates a network for solidarity, communication and struggle against the crisis and its profiteers, with the participation of resisting workers.

Communist Party of Turkey (TKP) last week declared the initiation of a solidarity, communication and struggle network against the crisis and its profiteers, the capitalists. According to the news portal soL,  TKP declared that it would welcome those who wish to have access to this network at its buildings, clubhouses and representative agencies. 'We will join our forces', said the declaration, 'We will not bow down to the bosses. We will clamp down on the exploiters. Those who suppose that workers are all alone should know that we will breathe down bosses’ neck.'

Workers from different sectors struggling against layoffs, de-unionisation and pressure from bosses participated during the release of the declaration. Members of the workers' resistance in Cargill and Flormar factories, the notorious 3rd Airport of Istanbul and workers from sectors such as education, healthcare and banking were among the participants. TKP CC member Alparslan Savaş underlined that the discussion whether the economic crisis has started or not, veils the fact that the bosses are already pushing off the fall of profits on the people.

The declaration said, 'More bullying and intimidation for more exploitation: this is how the capitalists’ opportunism in the course of crisis works. We have things to do in order not to allow these opportunistic plans. The richest 1 percent have a wealth equal to the total wealth of the poorest half of the society; yet the rich continue to spin us the same yarn: we are on the same boat! No, we are not!'

CC member Savaş pointed out how the so-called measures against inflation is actually operating on behalf of capitalists. 'The bosses plan to have people work for lower wages and for longer hours on the pretext and threat of crisis. They will loot the government budget on this pretext, leaving the hospitals, the schools, the means of transportation without funds' he said. 'If the bosses are devising their schemes, the workers and the toiling people should devise their own schemes as well. In order to remind these looters that they will not be allowed to “run riot”, in order to prevent the opportunists from preying on our labour and country…'

In the declaration, TKP called the workers and toiling masses to get together and act together, in order to increase solidarity. For this purpose, the network titled 'We will breathe down bosses’ neck'  was initiated for provide communication and coordination among the workers who are already struggling or who need to struggle against bosses. The declaration listed the following objectives of the network:

●      Let’s expose all injustices, bullying, acts against the workers and the people through this communication network. Let’s clamp down on the bosses. Let’s ensure that everybody is aware of everything so that they can lend a helping hand.

●      Let’s not allow any worker, any labourer to be left alone in the face of exploitation and tyranny. Let’s join our forces. We should have our word: one for all and all for one.

●      Let’s be on the side of those who are left defenceless because of poverty, vulnerability, ignorance or fear. Let’s defend them. Let the people on streets, the workers at factories, the lawyers at courthouses to join their forces for this purpose.