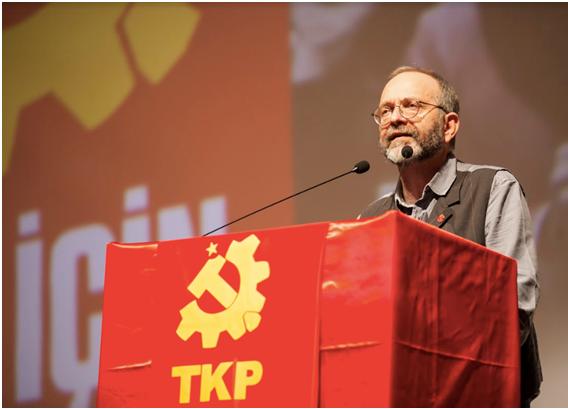 CP of Turkey (TKP) General Secretary Kemal Okuyan calls to quit analysing the warmongering of imperialists, including the position of Russia, and names it the 'pornography' of capitalism.

According to the news portal soL, Kemal Okuyan, the General Secretary of the Communist Party of Turkey (TKP), wrote an article on April 11 on an alleged chemical attack in Syria's Douma. Al-Qaida-linked "White Helmets," on Saturday started to surface of the alleged use of chemical weapons.

After news of the alleged attack many Western countries were not only quick to slam the incident, but also to accuse Syrian forces of being behind it. Trump on Wednesday had warned Russia to "get ready" for a missile attack on its ally Syria.

In his article Okuyan said, 'Everything is apparent. Capitalism is dying and has no way out other than delaying its fate by gradually destroying humanity. Yes, we do not need any analysis. In fact, the existing world order survives by sucking the blood of the poor'.

The full text of the article is as follows:

What you are reading is not an analytical article. The author of these lines thinks that today’s world has been out of a matter of analysis. What would you analyse? After a certain point, it would result in nothing but seeking for chaos, vagueness, and inconsistency and attributing a meaning to them. A detailed examination of the entire behaviours and speeches of Trump, Macron, Netanyahu, Erdoğan and others or of any agreement stemming from this or that summit would be no different from a detailed discussion of the starting elevens of Fatih Terim or Aykut Kocaman [the coaches of Turkey’s biggest football clubs, respectively Galatasaray and Fenerbahçe].

Everything is apparent. Capitalism is dying and has no way out other than delaying its fate by gradually destroying humanity. Yes, we do not need any analysis. In fact, the existing world order survives by sucking the blood of the poor.

We are all together witnessing the “insane” moment of international monopolies that are in search of sources of energy and raw material, new spheres of investment, markets and cheap labour force. We witnessed previously; however, the imperialist barbarity has become shabbier, more uncontrolled and more destructive today.

We do not need any analysis, there are two main issues: first, they are all together throttling the workers and labourers in order to further exploit them. Second, they are also throttling each other in order to get a bigger slice of the cake…

This is no more a matter of analysis.

A stupid on the top of the world’s top country has recklessly heralded an offense via social media today that could trigger a nuclear war which could annihilate humanity, and delivered his message to the rival country: Get ready Russia!

This stupid has missiles, he is boasting of new and smart missiles that would kill the poor in Syria, but he never concerns about this fact. The stupid is giving a message to Russia; no concern about the Syrians, they would be annihilated, it is okay, “Wazzup Putin, have you seen our missiles...”

When you are reading these lines, we may altogether see those missiles or we may witness Trump saying, “I did not say we would attack, but I sent my kind regards to Russia,” in an attempt to refute his tweet. We are no surprised; such inconsistent behaviours are extremely “consistent” with aggressiveness. Trump really fits in the top of the world today.

They are all together falling through.

A provocateur group that calls itself the White Helmets broadcasted some footage and said that “chemical weapons were used”. These footages may be fake. The opposition may have used the chemical weapons. There is no third option. We know in detail that some companies were established for fabricating fake news on Syria, and that the imperialist states funded such companies. We know how the imperialists have lied throughout history.

The White Helmets say that “chemical weapons were used”. The U.S. says that “Assad is an animal and we will punish”. The silly leader of France says that “unacceptable, we will move”. The palace in Turkey [President Erdoğan’s palace] says that “there are strong data”. Re-entered into Syria under the auspices of Turkey and claimed to have ruined the U.S. plans, the Free Syrian Army says that “we will attack government forces as soon as the missiles are launched”.

There is consistency between the behaviours of the super-power that is dragging the world into a destruction with a lie that nobody believes and the motives of the maniac who led to the dismissal of dozens of people with fake information and further went on a murder in Eskişehir [a research assistant under the protection of Gülen-linked rector recently shot dead four academics at a university in Turkey].

That is all from capitalism. Never say, “but what about Putin”! Russia is consistent, Russia is peace-lover, and Russia is reliable…

Is that so? Consistency? Look at his relation with Erdoğan, then you will see the consistency… Peace? Was not it Putin who had promoted Russia’s new weapons of mass destruction as a work of art before Trump’s missile tweet? Trust? Read between the lines of his Syrian policy, and then just think whether he provides reliability for Syria, for instance.

Putin is much more “qualified” than Trump, yet this does not change anything: capitalism has dreadfully decayed. Everywhere!

We are talking about such a world system that has led Binali Yıldırım, yes, even [Turkish Prime Minister] Binali Yıldırım to say, “They are threatening each other with tweets. Brothers, would the world sit and watch your mutual row and the extinction of millions of people?”

Could all these be a matter of analysis? Or, is not capitalism more naked and largely pornographic?