TKG: "We will be the ones to throw imperialists into the sea!" 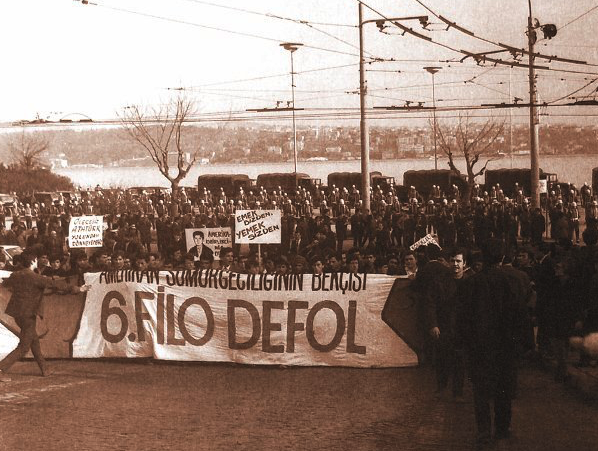 On the 50th anniversary of casting US Navy soldiers to the sea by university students, the Communist Youth of Turkey (TKG) condemned the neo-Ottomanist aspirations and declared the conditions to free Turkey from imperialism.

According to the news portal soL, 50 years after the casting of the soldiers of the US Navy 6th Fleet out to the sea by university students in Istanbul, the Communist Youth of Turkey (TKG) issued a declaration about their anti-imperialist stance. Stressing the ongoing warmonger politics in the region and also theoretical evaluations against imperialism, the statement has as title: "Those who don't target imperialism can't defeat imperialists: While they preach, we will be the ones to throw imperialists into the sea!"

With reference to Vladimir Lenin, imperialism is described in the text as a "world order" which is "in the hands of big monopolies" and it is claimed that expansionist disposition is an inseparable part of the capital. Condemning the "neo-Ottomanist" aspirations of the bourgeoisie of Turkey, the TKG points out the lack of justice in the World and defines the NATO as "the biggest terrorist organization".

In respect to the 50th year of the spectacular protestation against the US Navy 6th Fleet on July 17, 1968, the TKG reminds the importance of getting organized for an uncompromising struggle against imperialists and their collaborators and puts forward that today independence can only be possible with socialism.

The four tasks drawn by the TKG in order to free Turkey from imperialism are as follows:

1) NATO and USA bases will be seized. Foreign troops will be deported.

2) Troops which have been sent to Syria and other countries for the interests of the bourgeoisie will be withdrawn.

3) The agreements with imperialist powers on the training and modernization of army and police force will be repealed.

4) Starting with the strategic sectors, the economy will be nationalized and central planning will be applied. Plans for development will be put forward and applied.