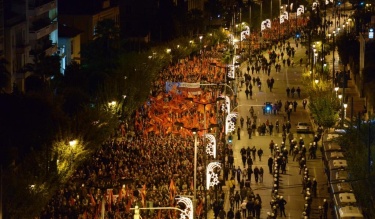 Communist Party of Greece (KKE) and Communist Youth (KNE), took part in the massive march to the US embassy, appealing upon the government for Greece’s disengagement from the imperialist plans.

On the 17th of November 2015 at the 42nd anniversary of the Polytechnic uprising of the students and workers of Athens, against the military junta in 1973, thousands of people marched to the US embassy, sending a clear message to the SYRIZA-ANEL government, raising the demand for Greece’s disengagement from the imperialist plans.

The General Secretary of the CC of the KKE Dimitris Koutsoumpas, who participated in the demonstrations said: “This is the beginning of new struggles against fascism, the monopolies, and their system. People’s sovereignty, out with the USA, the EU and NATO. These are the timely messages today of the heroic militants of the Polytechnic.”

The statement of the Press Office of the CC of the KKE, regarding the anniversary, stated:

“The people must be in a state of vigilance and readiness, because the government entangles the country and the people in dangerous machinations of the imperialists against the peoples of the Eastern Mediterranean and Middle East and actively participates in the plans of NATO, the USA and the EU, providing entire regions of the country for the creation of new NATO bases and aggressive military infrastructure.(...)
The lessons of this uprising are relevant today, as the power of capital remains in place as well as the country’s integration in the imperialist organizations, like NATO, i.e. those factors that led to the imposition of the dictatorship (…) the transition from the military dictatorship to bourgeois parliamentary democracy in July 1974 did not provide a substantial and final solution to the people’s problems of poverty, unemployment, the constant undermining of popular rights and liberties (…) It was demonstrated that whatever concessions are won by the workers inside the capitalist system are temporary. That whatever governments are chosen to manage this rotten system and its laws, they will inevitably follow anti-people policies. This has been demonstrated by the “left” government of SYRIZA-ANEL, which continues the political line of the previous governments of ND and PASOK.  The crises, unemployment, austerity, poverty, wars will exist as longs as power is in the hands of the capitalists, as longs as Greece is shackled to the imperialist organizations of NATO and the EU (…) The experience of the last 42 years since the Polytechnic uprising and the fall of the junta a year later highlights that the real issue for the working class and the other popular strata, in each historical phase and turning point, is the concentration of forces for the struggle against the monopolies, the imperialist unions, capitalism, aiming for workers-people power, socialism. Only in this way will the workers’-people’s struggle, which develops on the basis of the intensifying problems, become more effective, be able to repel anti-people measures and win some victories, i.e. when it targets capitalist power and ownership itself, without being trapped into supporting bourgeois governments, whatever mantle they may wear.”

The Poliytechnic uprising which took place in the year 1973 after the coup in Greece, had been the conclusion of the accumulated unrest regarding the sharpening of the socio-economic contradictions in Greece and the rise of the anti-dictatorship movement. The dissatisfaction grew even in the army, the regime's main support.

In the mid of 1973, the demonstrations  of the workers grew over several sectors as well as the expanding mobilizations and  struggle of the university and technological institutions students. On the 17th of November, at night, tanks were deployed to attack the revolted students and workers, killing 56 people. Despite these brutal attacks, reaction against the regime grew and spread all over Greece.

For more detailed information on the Polytechnic uprising and photos and the videos of the Athens marches, see the link.