Thousands gathered at the election rally of the TKP 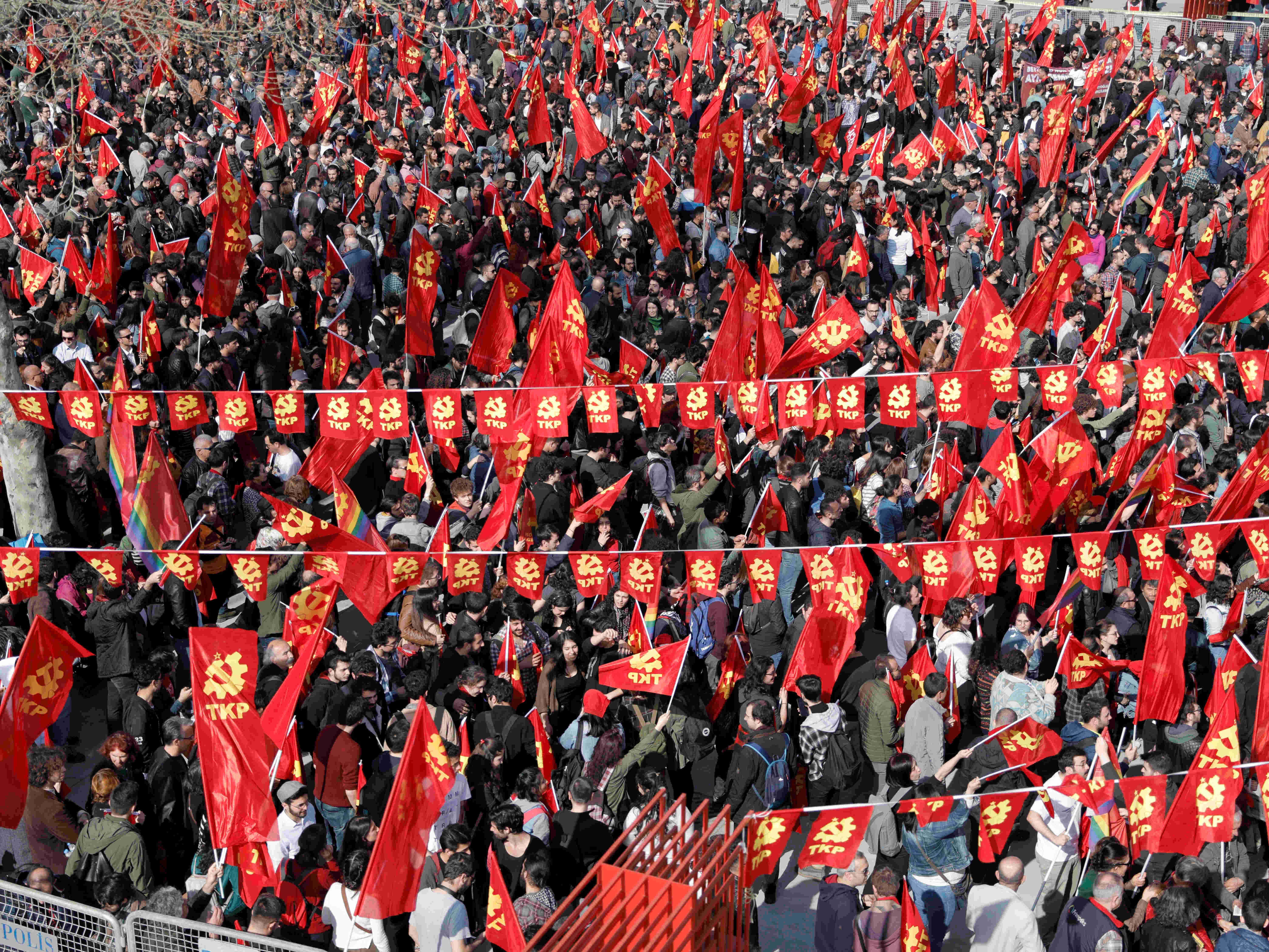 The Communist Party of Turkey (TKP) held a promising election rally in İstanbul on Sunday, March 10.
ICP, 13 March 2019
On Sunday, March 10, thousands of people gathered in İstanbul's Kartal Square for the rally of the Communist Party of Turkey (TKP), chanting the slogans "If money has its reign, working people have their Communist Party" and "We are not in the same boat". TKP, as the one and only political party that truly represents the working people of Turkey in the upcoming local elections on March 31, has already launched its electoral campaign in all 81 provinces of Turkey, 85 districts and 2 towns with its mayoral candidates and municipal councils.
Members and friends of the TKP who came together in the rally from different provinces of Turkey reminded that now it is time to strengthen the struggle of the working people and showed solidarity with the TKP by participating in the rally and shouting slogans. The presenter during the event was the renowned actor Orhan Aydın. TKP's General Secretary Kemal Okuyan, TKP Dersim candidate Fatih Mehmet Maçoğlu and Mazgirt candidate Derya Öz, journalist-writer Enver Aysever, communist poet Nihat Behram and Istanbul metropolitan mayoral candidate Zehra Güner made speeches from the platform set for the rally. The music band of the Nazım Hikmet Cultural Center, Yapıcılar and the musician Nejat Yavaşoğulları attended the rally with their performances, playing and singing songs and anthems.
Greeting the working women of Turkey with reference to the March 8 International Working Women's Day, all of the speakers mention the importance of working women's struggle in strengthening the struggle for socialism and liberation as well as the importance of the role of communist women in this struggle. Metropolitan municipality mayoral candidates of Istanbul, Ankara, and İzmir are women cadres of TKP that have had prominent political and organizational responsibilities before their candidacy.
TKP Secretary General Kemal Okuyan said the essence of the issue is to create a new Turkey and added: "we are using the word 'new' as revolutionaries, as communists. For us, new means more progressive, more advanced, enlightened. And we claim that we will establish a new Turkey. Because this darkness, this injustice, and this inequality do not fit our beloved country". "Yes," Okuyan continued, "we will overthrow this system that produces inequality, injustice, poverty, unemployment, crises, and wars. We're saying it honestly. We will overthrow! To establish the new system, the beautiful one, the equal one." He also called on the people to support communists in the local elections in order to strengthen the hope.
TKP Dersim candidate Fatih Mehmet Maçoğlu and Mazgirt (district of Dersim in the eastern Anatolia region) candidate Derya Öz greeted the people attending the rally. They called for voting for the communist to expand the example of socialist municipality experienced in Ovacik to the entire country. “While rich people lead a life of pleasure, we will try to make a new life possible despite those who make the working people suffer. We have gathered as hundreds here and it is our duty to make this fire burning all over the country on March 31; it is time to pay this debt, comrades. On March 31, let's give the power, the voice, the decision to the communist women! Vote for the Communist Party of Turkey!” Derya Öz, stated.
The communist mayoral candidate for İstanbul, Zehra Güner, also called the people and the voters of İstanbul to strengthen the struggle for the good of İstanbul’s working people. Mentioning that there is one İstanbul that capitalists want to exploit for profits, and there is another in which the working people are trying to survive in harsh working and living conditions, Güner said that “each vote for TKP will strengthen the barricades built against the system of capitalists and reactionists”.
Tweet