PCP on the results of the general elections 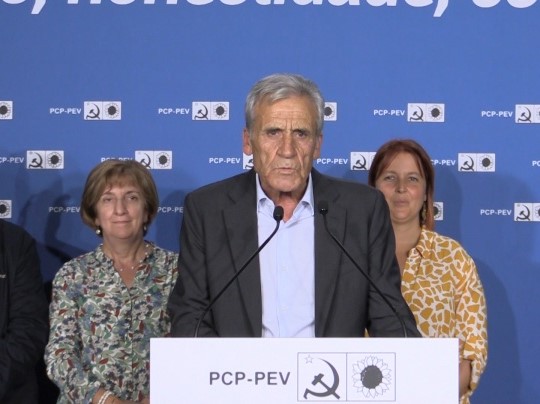 The statement of General Secretary Jerónimo de Sousa.
ICP, 11 October 2019
The Portuguese Communist Party (PCP) participated in the general elections of October 6 within an electoral coalition with the Greens, under the Unitary Democratic Coalition (CDU). The General Secretary of the PCP, Jerónimo de Sousa, shared a statement about the results of the elections. The statement resembled the results with the one of 2015, but still corresponding to a different political context. De Sousa stated that important steps have been taken in defending, resorting and achieving these rights during these years, but still, these achieved rights are not enough for responding to the country’s problem. According to the statement, these developments raise the need to open a way to a policy that will break with the essential guidelines of the right-wing policies. A break with the interests of big capital, valuing labour and workers, and breaking with the submission to the Euro and the impositions of the European Union are considered as the current solution in order to fully respond to the country’s problems. With recalling what is necessary today, moving forward and not losing the rights that were achieved, PCP GS said that they are tied to their commitments to the workers, to the struggle, and to the people.
In the elections, the CDU’s electoral expression and the number of elected MPs were decreased because of the intense and prolonged targetting against the Party. According to the statement, this is a negative factor for the life of the country in the near future. With these results, the interests of the workers and the peoples will be less protected, but the CDU’s struggle will be the struggle of the workers and the people that will be called upon to prevent retreats and contribute to moving forward.
De Sousa also mentioned the significant loss suffered by the PSD and CDS. The reason behind their loss is their responsibilities in the policy of social retreat and economic decline they imposed upon the country. However, this loss is not a way for defeating the projects associated with right-wing policies. In order to defeat the right-wing policies, the General Secretary expressed that it is not enough to deny an absolute majority for the PS, but also, and equally decisive, a stronger CDU and more weight for its MPs.
On behalf of the CDU, De Sousa conveyed greetings to ones who voted for them and thousands of activists who contributed to build the CDU’s result, and finished the statement by reaffirming to act in defense of workers and the peoples,
See the link for full text.
Tweet