'Our people have but one choice, continual class struggle and unity' says KKE leader 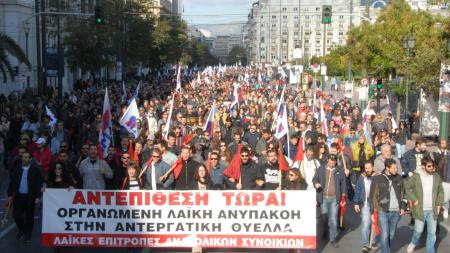 The GS of the CC of the Communist Party of Greece (KKE), Dimitris Koutsoumpas gave a speech at the mass demonstrations at the 3rd December general strike.

Dimitris Koutsoumpas, in his statement to the mass media at PAME’s rally in Athens said:

“This is not the time for stage-managed dialogues, consensus, new false expectations about the reformation of the bourgeois political scene, which lead in essence to the manipulation of the labour-people’s movement, so that they can pass the new barbaric measures more rapidly and more easily.

Our people have but one choice: continual struggle, class unity, the people’s alliance everywhere, all over Greece. The KKE, the class-oriented trade union organizations will be in the frontline of the struggle so that the new anti-people measures do not pass, so that the plans of the government, of capital, of the EU do not pass. So that all the anti-people laws of the previous governments are abolished.

No passivity, continual struggle, people’s alliance, this is the message of today’s strike rally.”

On 3rd December tens of thousands of striking workers, from every sector, unemployed workers, pensioners, women and youth demonstrated at the day of the general strike, all over Greece against the dismantling of social-security by capital-government-EU and against the new heavy taxes at the expense of the popular strata.

At the demonstrations Spyros Marinis, member of the Executive Secretariat of PAME and the Executive Committee of the Teachers’ Federation of Greece and Nikos Papanastasis, member of the “Movement for National Defense” and the “Initiative of retired officers for the defense of the social-security system”, also gave speeches to masses.