Okuyan: 'However… we still say, ‘Down with the order!’' 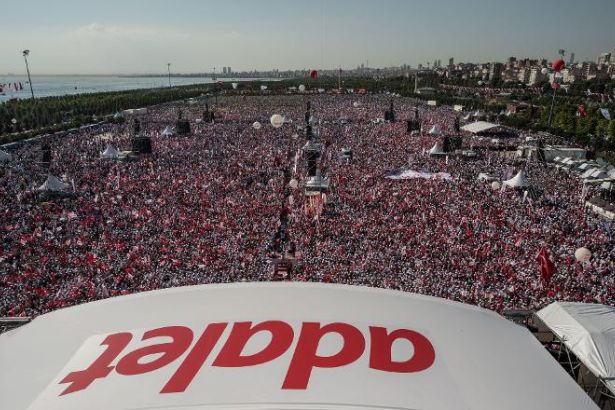 Commentary by Kemal Okuyan, First Secretary of Communist Part of Turkey (TKP), on the political results of the 'justice march' and the following mass rally by Turkey's main opposition Republican People's Party (CHP)

Last Sunday, a massive Istanbul rally was the final stop in 450km ‘justice march’ from the capital, Ankara, led by Kemal Kılıçdaroğlu, leader of the Republican People’s Party(CHP) – the main opposition party –protesting against arbitrary arrests and dismissals after coup attempt.

SoL international news portal published  a commentary by Kemal Okuyan, First Secretary of Communist Part of Turkey (TKP), on the political results of the 'justice march' and the following mass rally.

The full text is as follows:

The great success of the Right

In Turkey, not one but two leaders appear within the front of the establishment as of today. While everyone focused on Akşener [right-wing leader of an anti-Turkish President Recep Tayyip Erdoğan split group from pro-Erdoğan Nationalist Movement Party], Kemal Kılıçdaroğlu [chair of main opposition CHP] has made a giant move, putting an end to the unrivalled status of Erdoğan.

A great success is at stake. Kılıçdaroğlu managed an almost perfect process in terms of timing, methodology and context. In today’s world, a debate on whether a mastermind exists behind him would be meaningless. Suddenly getting rid of his hitherto low profile, Kılıçdaroğlu has given a thorough response to the search for terminating the unrivalled status of Erdoğan.

Indeed, his task was not that hard. “Something should be done against Erdoğan”, almost all the circles from his own party to the Left have uttered, who previously criticised the chairperson of CHP for being negligible and ineffective. These criticisms caused the essence to be ignored; the ideological concerns that were felt leastwise in small portions until three or four years ago have ceased to exist. What matters now was to call him, “Hey man, go into action!”.

Therefore, when the justice march started, the puzzlement –“look, he is marching”- has turned into a great respect in a short time. The threshold of expectation was lowered so much that it became enough for Kılıçdaroğlu to stand upright, taking on a harsh march in summer’s heat so as to please the large masses. Hardly anybody remained to question it as a strategy based upon immobility at critical turning points for years was replaced with a long march.

While the Communist Part of Turkey (TKP) said, “the real injustice is the system of exploitation”, it did not intend to spoil the march, but indicated to a basic reality such a mobilisation that was apparent to encompass great masses could not reach.

And, what did Kılıçdaroğlu indicate?

Let’s be honest and give a brave answer.

The 'justice march' has become the third wave of mass actions that have been witnessed in the AKP’s Turkey. The Republic Protests [a series of secular mass rallies of 2007], the Gezi Resistance [anti-government mass demonstrations of June 2013], and now the 'justice march'… Despite the three are different from each other in terms of their scope and importance, the latter is completely distinct from the rest regarding its ideological orientation.

The ideological colour of the Republic Protests was more or less apparent. The June Resistance witnessed pro-Enlightenment, modernist, libertarian, and patriotic colours time to time. Despite they have been enriched with new elements, almost the same masses of the Republic Protests and the June Resistance took stage again during the Maltepe Rally [mass rally in culmination of the justice march], yet with an ideological frame that is barely possible to be defined at this time: Non-ideology…

This situation cannot be discussed simply as Kılıçdaroğlu wanted so.

The position of anti-Erdoğanism should be well defined in Turkey.

Who can object to the ten points, except few of them, declared by Kılıçdaroğlu in Maltepe? Some talk about inclusiveness; yet this language has been developed in order to carry anti-Erdoğanism, which has failed to witness a happy end in Turkey, from a decontextualized “Left” to the Right completely. Moreover, the Right does not hold any context all the time.

Kılıçdaroğlu has accomplished. With the discourse of the “New CHP”, he managed to gather around wide masses by purging them of their entire extremities, including a ten-year-old fantasy set up in the corridors of the European Union --the rapprochement of CHP and the Kurdish movement.

Capitalism is happy, so is Germany… so are the vast masses of people who live in Turkey’s developed regions and seem assertive in denying surrendering to Erdoğan, as it was seen once again during the referendum [of April 16].

So, what will happen after such a big pleasure?

Erdoğan is facing a really difficult condition. He already lost ground, and now he has difficulty in taking initiative; if he takes it, then it is highly probable for him to make a mistake. The speech he delivered in Germany was an average of panic and despair. Furthermore, Erdoğan has been locked up since Kılıçdaroğlu started to march.

In any case, he will push himself to do something, yet the conditions are different from now on.

Kılıçdaroğlu, on the other hand, has dissolved the already obscure Left in the crowds. His primary intention was to catalyse the “new birth” that has not happened somehow within the central Right. Upon the Maltepe rally, extra canals have been set in order to lead the accumulated energy within the AKP to be released.

The supporters of AKP, who had said, “It seems impossible”, during the referendum, saw that the time was getting up when they looked at Maltepe.

Is that good news?

Of course, it is.

So, what will emerge from this overall picture?

The search for order has witnessed anti-Erdoğanism all the time. Some made a great effort not to lead this search for the order and stability to a search for [G1] [G2] [G3] a change of system. Some concepts that were necessarily expressed even by the pro-establishment Left, and whatever echoed the reality of class have been abandoned; a secularism subjected to religiosity was produced, and the phenomenon of imperialism fell into oblivion.

The Left also helped this operation by means of the language of “immediate tasks”.

The order has won this stage. The Left is not even a detail among the winners.

That is the cost of retreating Erdoğan.

Salute to all those people who marched and kept the hopes alive.

However… we still say, ‘Down with the order!’

And, we are continuing from this point.