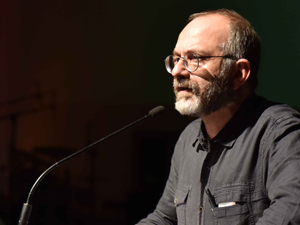 Interview with Kemal Okuyan, the GS of the Communist Party of Turkey (TKP), on the recent developments in Turkey and the region.

Ta Nea newspaper of Greece interviewed Kemal Okuyan, the GS of the Communist Party of Turkey (TKP) on the latest developments in Turkey and the region. Okuyan noted that the decision of snap polls was based on several reasons like the rising economic crisis in Turkey, the impasse in Syria and increase in the struggle between bourgeois parties.

See the full interview below:

What was the decision of snap polls based on and under which circumstances will it happen? We know that some of the parties including TKP were not allowed to take part in the general elections. What was the reason behind that?

Kemal Okuyan: There had been several reasons behind snap polls. Foreign debt above 500 billion US dollars; increasing inflation and unemployment; idle real estate due to a swell in the construction sector; daily erosion of Turkish lira and there is a public that perceives getting impoverished each day. Erdoğan announced snap polls before this whole picture gets worse.

Syria was another reason behind snap polls. Erdoğan tries to make advances towards Russia for more power while at the same time negotiating with the US. However, the pace of developments in Syria is so fast that he tries to prove the US and EU that there is no alternative except for him.

Third reason is about catching the parliamentary opposition and especially İyi Parti founded by Meral Akşener off guard. It is very well known that Erdoğan ordered the Supreme Electoral Council of Turkey (YÖK) to lessen the number of parties in the elections. İyi Parti obtained the right to enter the elections through 15 MPs of CHP transferred.

These problems are not new for TKP. They hindered TKP's right to enter the elections through additional laws fabricated at the last moment. TKP will enter the general elections with independent candidates in various provinces. They [Erdoğan and YSK] had to do this because TKP is the only political actor struggling to change this social order.

Does Erdoğan have any rivals in this election? How do you evaluate the manoeuvres of the opposition and the Gül's decline of presidential candidacy?

KO: Gül has always been a politician who avoided taking risks. He would have accepted being the joint candidate of the whole opposition. "AKP without Erdoğan" has long been the common plan of both the national bourgeoisie and the imperialist centres. Gül's decline removed that plan from the equation. The opposition made an agreement of alliance for the general elections and this will have consequences on the results of presidential elections. The basic strategy is to run as many presidential candidates as possible in the first round and to support Erdoğan's rival in the second round. This can be either Akşener or the candidate of CHP (Since the interview was made before May 4, İnce had not been announced as the candidate of CHP). This is not a simple political struggle but the rivalry of international monopolies. Turkey is at the centre of very important rivalries at the moment.

Is it possible to say that a terror regime reigns Turkey in the post-coup attempt period in Turkey? What kind of a Turkey do you expect in June 25?

It is true that Erdoğan made his own counter-coup following July 15 coup attempt. However, he is not as strong as considered by the people. On the contrary, it is possible to say that his whole strategy is "saving the day". Erdoğan makes use of conflicts among the imperialists against the working class so that he can please the capitalists.

Nothing will be solved after the elections. If Erdoğan wins, it will be a narrow win and it will not solve any problems he is facing at the moment. If he loses, he will not accept the result and struggle to undo it. Therefore, we do not see 24 June as a turning point. In countries like Turkey, elections do not serve as mechanisms to "change the course of history". TKP focuses not only on 24 June but also on the 25th.

'THE INTERESTS AND ENEMIES OF THE PEOPLE ARE COMMON'

How do you evaluate Erdoğan's threats to Syria, Cyprus and Greece and his steps in Eastern Mediterranean? Do you think there is any possibility of military conflict in the Aegean sea?

KO:There is always the risk of war in imperialist system. Capitalism without wars is not possible. International and regional conflicts are quite sharp and war is always a possibility. Negotiations and wars are the two sides of the coin. There is no absolute hostility or alliance. Alliances built on slippery grounds can change any day. It is true that Erdoğan likes to play with fire, but he can dance sirtos the next day! He had done that before...

Erdoğan says Greece is a "terrorist shelter". He proposes to release two Greek soldiers arrested in Turkey in exchange for eight deserter Turkish soldiers. Do you think he relies on the hostage policy?

KO: Although the word "terrorist" has some traps, it lost its all meaning with Erdoğan. Millions of people in Turkey have been called terrorists. I have no sympathy whatsoever for the soldiers that sought asylum in Greece, but we cannot deny that two Greek soldiers are kept hostage in Turkey. The interests of the capitalists that promote nationalism in both sides unfortunately causes animosity and hatred between Turkish and Greek people. However, the interests of the people are common. The situation would have been so very different in a socialist system in both countries. TKP assumes pointing at the basis of class in the struggle and spreading the idea of socialism as the only alternative that would enable real working class power as its duty.