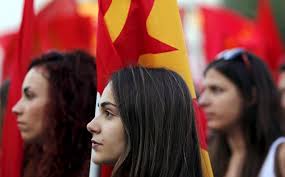 The Secretariat of the European Initiative of Communist and Workers' Parties released a statement emphasising the unity of class struggle and the women's struggle on the International Women's Day.

The statement of the Initiative is as follows:

"The European Communist Initiative sends warm militant greetings on International Women’s Day to all the women workers, unemployed, dismissed workers, pensioners, self-employed, farmers, young women especially from the poor popular strata who are studying and are at the same time working in many instances, the women with disabilities and the mothers of children with disabilities. It particularly expresses its full solidarity with the sorely tested women refugees and immigrants and with all the refugee mothers.
International Women’s Day has its historical roots in the strikes of the women seamstresses of New York, the bloodstained struggles of the women from the working class and popular strata. Today it signals the need to reinforce the struggle of women for the abolition of women’s inequality, as well as of the capitalist system that creates and nourishes it.

Gender inequality is inherent in capitalist society. It is experienced by women of all ages, particularly of the working class and other poor popular strata. This inequality is not just reflected itself in terms of the level of salaries, health, welfare, and education and free and public access to them. The political line of the EU and its governments and the harsh anti-worker measures strike the women of the working class and popular strata.

The deepening crisis of capitalism exacerbates women’s exploitation and inequality. In this context it is important to not forget the double oppression of, predominantly, women, who apart from being exploited on the capitalist labor market, also face the burden of household labor, under the banners of the compulsions of the capitalist system , ”tradition”, anachronistic views.
Moreover, the offensive against women's rights is conducted not only by forces of reaction, but also by so called liberal ”progressives” liberal forces, which divert women away from participating in the class struggle. They focus on issues to do with men’s attitudes towards women and exonerate the unequal class society. They seek to impede the participation of women in the struggle against the basic causes of their torments.
The aim of the bourgeois classes and their imperialist organizations like the EU is particularly dangerous i.e. their aim for the imperialist wars to be promoted as “wars of charity” to supposedly ”improve conditions of the people and women”, for example in Syria, Afghanistan, while in reality affecting women and the peoples in the worst ways possible. And they create flows of refugees who are being persecuted by capitalist barbarity itself and the imperialist interventions of the USA, EU and NATO all over the world.
The European Communist Initiative and the CPs that participate in it in each country will continue to intensify their struggle for all the contemporary rights of women of the working class and popular strata, for women’s emancipation which is inextricably linked to the struggle against women’s inequality and capitalist exploitation that gives rise to it.

The emancipation of women cannot be achieved without a firm struggle against capitalism.