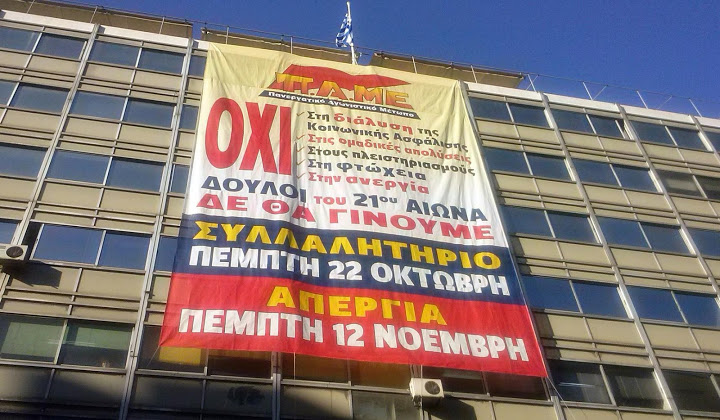 The All-workers’ Militant Front (PAME) had organized a symbollic occupation of the Ministry of Labour on 15th and 16th of October for protesting the new measures of the 3rd Greek Memorandum. There was also a mass demonstration on the evening of 16th October, after the voting on the measures of the SYRIZA Government and the new Memorandum bill.

It is reported that dozens of trade unions, people’s committees and youth have made statements against the new Memorandum during the action for two days. At the symbolic occupation of the Ministry of Labour on the 15th October numerous activists of PAME hung a banner covering the building’s facade condemning the attacks on social security, mass dismissals, repossessions, poverty and unemployment.

The main slogans of the two days of actions were as follows:

"We will not allow the destruction of Social Security

We will not surrender labour rights, which were gained through struggles and blood"

PAME also called for taking part in the demonstrations on 22 October and the strike on 12 November.

The coalition Government of SYRIZA brought a bill with the prerequisite implementation measures of the 3rd Memorandum to the Parliament on 16th October, Friday. The measures like: new wage cuts; raise of the retirement age limit up to 67; new pension cuts and new taxation for the people, within the bill have direct affects on the Social Security system of Greece. On the other hand PAME reports that there are some incentives for the capitalists like: erasing the debts of the monopoly groups and new tax exemptions.

The 3rd Memorandum is said to be the preperation phase for the new and harsher anti workers’ bills in November.