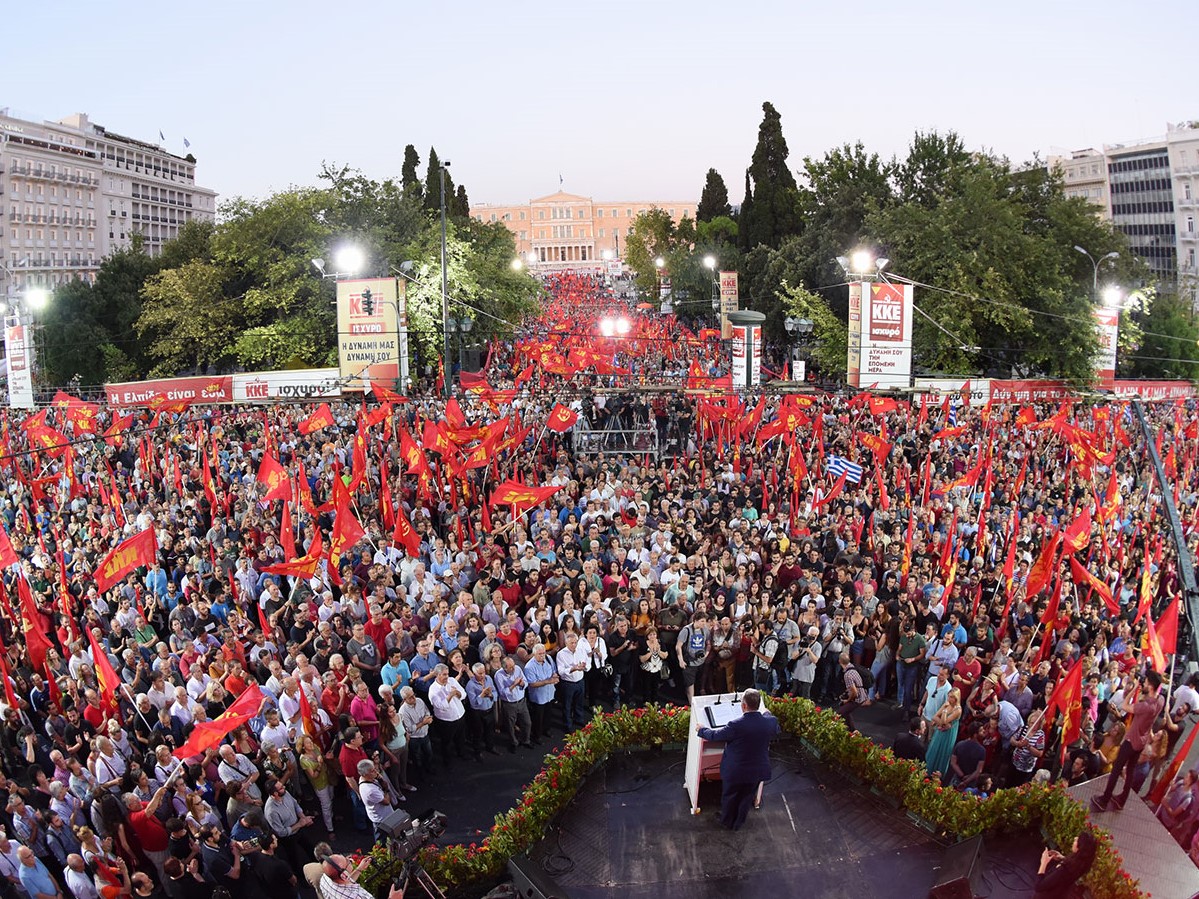 Message of militant popular resurgence from the thousands who flooded the center of Athens.

The Communist Party of Greece (KKE) held a massive rally in Athens for the elections of July 7. According to the Party, the huge rally held in Syntagma Square sent "a
clear and decisive message of militant resurgence and optimism for the battle being waged up until the last moment before the elections July 7th to strengthen the KKE." The GS of the CC of the KKE, Dimitris Koutsoumpas, noted, "Every next government of anti-people management will be the same and worse than the previous one. This is because it builds upon the anti-people framework that is already in place and reinforces it. Within this new anti-popular scenario, there is one and only one issue. The need for the KKE to be strong so we can fight even more powerfully, more decisively within the Parliament but also in the labor unions, the workplaces, the neighborhoods, the schools and universities. To struggle for what we need, for that which the people create but also that which is robbed from us by a series of reactionary laws that are in place and will continue to be so."

Referring to the anti-people policies of the "left" SYRIZA government but also to the plans of the right-wing ND party and the social-democratic KINAL, Koutsoumpas stressed, "Progress does not mean sucking the life out of an entire people in order to give it back to a few monopolies with funds and programs for their strengthening. Progress is with scientific central planning, with the people masters of their homeland and with the keys to the economy in their hands, for their contemporary social needs to be satisfied on all levels: in health, education, leisure, social insurance, culture, athletics. The scenario for our lives we will write ourselves and it will be written based on our needs. It will be written with our dreams. The KKE will be here on July 8th. We call on the people to contemplate, to assess the strength, the impetus that workers' struggles can have if the KKE has a higher percentage, is stronger, with more parliament members. With greater possibilities of supporting and organizing our demands. With greater possibility of revealing what's really going on and putting forward relief measures in the Parliament."

The GS of the CC of the KKE considered the dangerous developments in the region as one additional reason to strengthen the KKE in the July 7th elections. "Because," he continued, "as we all know, the more active involvement of our country in the designs of the USA and NATO, in the energy rivalries that are escalating in the wider region, are just another side of the anti-people coin of the domestic front of our country. These policies brought about the American-NATO Prespes deal. These policies are bringing new greater dangers in the Aegean and in Cyprus, based on the logic of 'joint management' that is being promoted by NATO and the USA. They are bringing, more than anything else, great dangers for the peoples of the region, more generalized warfare. These policies have transformed the energy reserves that exist in our country and the neighboring countries into a curse for the peoples."

As to the political forces that aim to surpass the electoral limit of 3% so that they can be represented in the new Parliament, Koutsoumpas declared, "in the next Parliament 4 memorandum parties – ND, SYRIZA, KINAL, MERA25 - , 2 fascist, far-right entities – Golden Dawn and Greek Solution, are vying for seats. AND the KKE! We will not allow those who governed before and have brought us to the state that we are in; nor will we allow the fascists, the racists and the far-right to speak in the name of the people and the youth. On July 7th all of the next period will be decided, from July 8th and on. What will be decided is how strong is the party that will stand beside the people, the youth. How strong will we be against the new government that will continue the same harsh anti-popular policies."