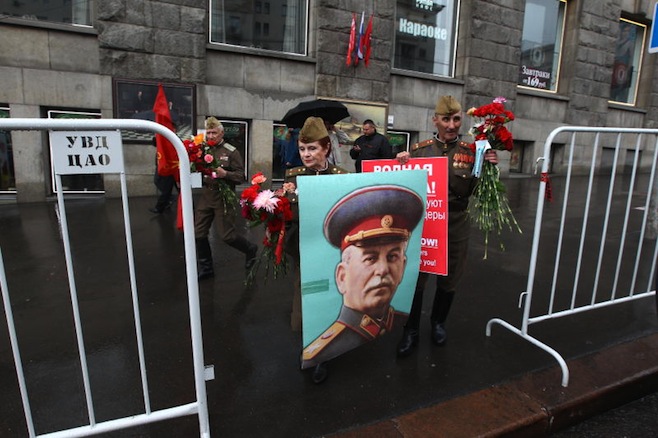 Party Secretary for informative-analytical work and electoral technologies who also represents the Communist Party of Russian Federation (KPRF) in the lower house Sergei Obukhov, informed Kommersant about the plan to use Soviet leader Josef Stalin’s image in the upcoming State Duma elections.

Obukhov explained that the Party considers Stalin’s image as a means of attracting voters additional to the traditional electorates.

KPRF official website reports that, several regional organizations have started to manifest their demands and take initiatives for driving Stalin’s image forward in the party agitation. In several cities KPRF cadres have taken action for increasing the public appearance of Stalin’s image including erecting his busts in public places or use of Stalin posters more frequently in the local party actions and propaganda work.

One of the remarkable proposals arose on the 14th of this month during the congress of KPRF in the Penza Region. First Secretary of the Regional Committee, Dimitri Filyaev proposed denunciation of the decision taken in the Twentieth Party Congress for “discrediting the cult of Stalin”. All the participants of the regional congress supported the proposal. Vice-secretary of the KPRF for ideology, Dimitri Novinkov told Kommersant that the Central Committee examined all the initiatives coming from the regional organizations. He added that the KPRF would concentrate on the pre-electoral program and strive to ensure the candidates to be sent to the State Duma. The denunciation of the decision of Twentieth Party Congress will be proposed to the Union of the Communist Parties, an organ composed of the communist parties of the former Soviet republics.