KPP protests the destruction of the Soviet soldiers' monument in Warsaw 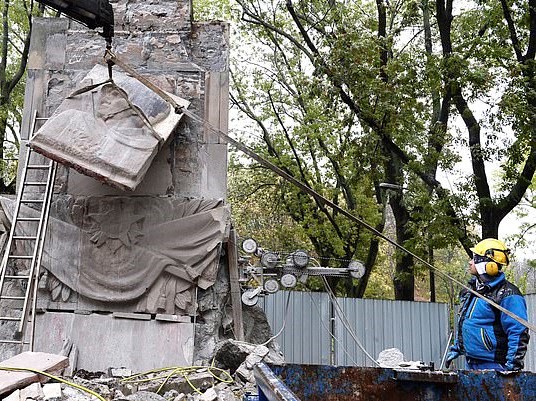 The monument commemorating the soldiers of the Red Army torn down by Polish authorities, KPP protests the destruction.
ICP, 24 October 2018
The last incident of the "decommunization" campaign in Poland has been the destruction of the monument in Skaryszewski Park in Warsaw commemorating the 26 Red Army soldiers who died on September 13, 1944 during the liberation of Warsaw from Nazi forces. It is known that in 1944 and 1945, totally more than 600 thousand Soviet soldiers perished for the liberation of Poland. The monument in Skaryszewski Park was the last monument commemorating the liberation of Warsaw.
Pointing out the efforts of Polish authorities to rewrite and falsify the history, the Communist Party of Poland (KPP) protested the destruction of the monument, which they considered as "an example of barbarity which can be compared to what Talibs or Islamic State were doing, removing all historical relics not fitting to their ideology." The KPP declared that historical truth can not be pushed into oblivion with the use of the pneumatic hammer.
See the link for full statement in English and Russian.
Tweet