KNE: All fascists out of our schools! NATO out of Greece and the Balkans! 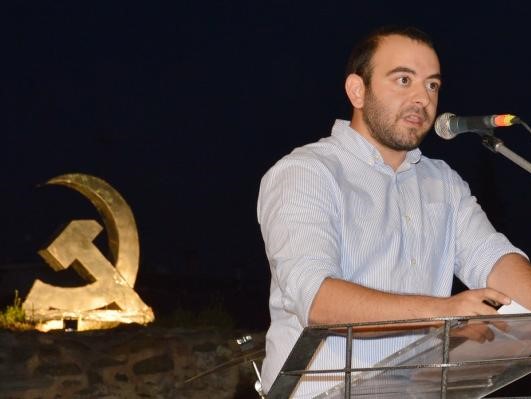 On behalf of the Communist Youth of Greece, Nikos Abatielos evaluated the recent mobilizations in Greek schools.
ICP, 19 December 2018
Two weeks ago, mobilizations were organized in Greece through anonymous appeals with nationalist and irredentist slogans spread in schools. The Secretary of the Central Council of the Communist Youth of Greece (KNE), Nikos Abatielos wrote an article for a Greek newspaper, in which he declared that the efforts of various fascists failed thanks to the determined position of the students. Organizing student mobilizations with the participation of tens of thousands of students under the slogan, "We fight for our rights in education and life. No to the Tsipras-Zaev agreement. All fascists out of our schools. NATO out of Greece and the Balkans,” KNE played a key role in the isolation of the fascists, whose plans eventually failed.
Referring to the position of the Communist Party of Greece (KKE) on the Macedonian name issue, Abatielos reminded that the Prespes Agreement was dictated by the USA-NATO-EU. Accordingly, he criticized SYRIZA who stated that "whoever is opposed to the Tsipras-Zaev agreement is a nationalist." Abatielos accused the governing party of "adding grist to the mill of the Nazi criminal Golden Dawn." He claimed that the anti-fascism of SYRIZA and its front with the far-right is "à la carte" and explained it with the examples of the creation of "hellholes" for immigrants in Moria and the glorification of Donald Trump as "devilishly good" by the same SYRIZA, which benefits from fascism for fueling a false bipolar schema in Greek politics. According to Abatielos, "it is not possible to deal with the serpent of Nazism under the flag of NATO and the dictatorship of the capital."
As to the struggle of the KNE, Abatielos concluded, "The KKE and its youth, KNE, have a great experience in confronting, revealing and coming into conflict with fascism and the system that breeds it. No one must forget this, because otherwise they will be led into wrong estimations."
Tweet