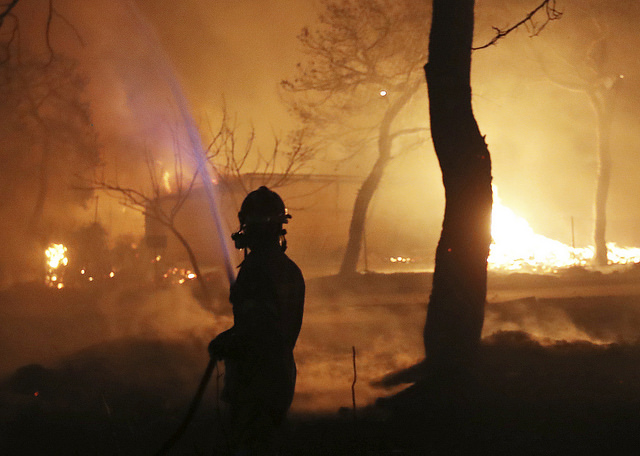 The Communist Party of Greece mobilizes the party for saving the people from the wildfire, caring for those injured and taking measures to prevent other disasters.

The Press Office of the Central Committee of the KKE issued a statement on 24 July during the disastrous fires in Attica near Athens. While expressing its condolences to the families of the victims and support to the injured people, the KKE demanded from that the government ‘to mobilize all the necessary forces of the state mechanism to support the inhabitants of the regions’.

According to the statement, the natural disasters "find" Attica unprotected and the infrastructures, which can face the consequences of these disasters, in total breakdown. The statement said, ‘Despite the heroic effort of firefighters and those involved in dealing with natural disasters, it is a predictable development that after such phenomena we will measure new victims and new incalculable disasters of popular properties and natural wealth. This is because there is no real planning to prevent and deal with them.’

The KKE reminded its timely warning at a central event on May 10th about ‘the major gaps identified at the start of the fire-fighting period in order to make substantial proposals on issues of prevention and protection of human life and the environment’. The statement pointed out that fire protection works, as well as flood protection and anti- earthquake protection projects are not being implemented because ‘they are a cost without profits for the capitalists and the bourgeois state’. Eventually, ‘the needs of the working and popular families literally become a sacrifice at the sake of the growth of business profits.’

On 26 July the KKE issued another press release reporting the visit of a delegation of the KKE, headed by the Secretary General of the CC, D. Kutsumbas, to the areas of Eastern Attica. During the visit, D. Kutsumbas talked with the residents of the district and met with the mayor of Rafina (the district that was in the center of the disaster) and the port's chief.

In his statement regarding the visit, Kutsumbas paid tribute especially to volunteers from trade unions, from the whole country, from mass organizations, people's committees. He underlined the need to provide support for the full restoration of water supply, electricity supply, and for shelter, food, clothing and care for all victims of the fire. Kutsumbas declared KKE’s participation to all these efforts and added, ‘From the very beginning, our forces, party organizations and members were here to help save all that could be saved’.

‘But I would like to emphasize the following: national mourning declared by the government, different words about "national unity, solidarity", etc., which, unfortunately, remain big words without an answer, today can not constitute an alibi to forget about the huge problems, which resulted from this inexplicable tragedy, to constitute an alibi, so that each time the government takes off a huge responsibility, like the current government, as well as the state apparatus, when the light of public projectors will go out and the problem with disappears.’

The GS of the CC emphasized that the duty of today is not to forget this tragety and take protective measures against fires and floods. He reminded that on May 23 the KKE had made a request in the parliament ‘to take measures to ensure fire safety and timely create an infrastructure’ which was left almost unanswered by the government. ‘This crime should not be repeated in the future. Therefore, it is necessary to mobilize, unite and fight all’ he said.