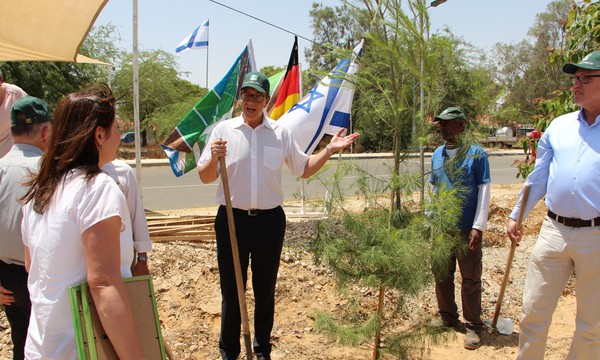 The Communist Party of Greece (KKE) issued a statement on the visit of the German Die Linke Party to Israel, exposing the support of the 'European Left' to imperialist operations.

The statement of the KKE mentioned the denouncement of the President of the Parliamentary Group of the the 'Die Linke' Party by the People’s Party of Palestine, regarding the President's  recent trip to Israel, visiting settlements and planting trees as ‘a message of support to the long-lasting occupation of Palestinian lands and of embellishing of the israeli crimes against the Palestinian people’. Die Linke, ‘The Left’ Party of Germany is known with its leading role in the European Left Party (ELP).

The KKE said the following:

'It is a conscious act that once again proves that Die Linke and the rest of the opportunist parties of the ELP put on the “mask” of progressiveness in order to deceive the peoples and in practice follow the dangerous politics of serving the bourgeois class, the European Union (that is upgrading its relations with Israel), the imperialist plans. There are a lot of examples.

‘The European Left Party (ELP) has supported the imperialist intervention of the USA, of NATO, of the EU in Libya, supports the imperialist pretexts for the war in Syria. It is a party that takes part in the anti-communist campaing in various ways and goes hand in hand with the most reactionary forces to distort the historical truth against socialism, against the Soviet Union and the other countries of the socialist construction.

‘In Greece, the SYRIZA government (SYRIZA being a distinguished member of the ELP) concedes everything to the USA, NATO and the EU: military bases, earth, sea and air for the imperialist interventions and wars; two days ago it provocatively supported the dangerous resolutions of the NATO Summit in Brussels and continues to sloganeer in order to obfuscate the dirty role that is plays! The SYRIZA government upgrades the military, political and economic cooperation with Israel, covers the crimes of the occupation forces, denies to recognize the Palestinian state while at the same time dares to use slogans in favor of the Palestinian people in order to hide its dirty role in the interior also!’

The KKE emphasized that this is the ‘method of opportunism and social-democracy’ which undertakes ‘all the dirty work in service of the imperialist plans’. According to the KKE, the Communist Parties’ crucial task, in return, is ‘to continuously uncover them, to intensify confrontation with these forces’.