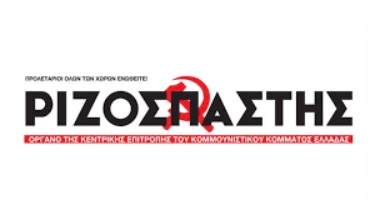 The CP of Greece says the development of the relations between the fascist Golden Dawn and the Embassy of the PR of China "whitewashes" the criminal organization.

The Communist Party of Greece (KKE) published a Comment in its newspaper "Rizospastis" regarding the meeting of China Ambassador Zhang Qiyue, with a delegation of the criminal Nazi organization "Golden Dawn". This is the second incident were the KKE exposes the relations of the fascist organization with the Embassy of the People’s Republic (PR) of China. A year ago, the KKE had sent a letter to the Working Group parties of the International Communist and Workers’ Parties (IMCWP), including the CP of China, condemning the invitation of the Golden Dawn to an event organized by the Embassy of the PR of China.

In "Rizospastis", the Organ of the Central Committee of the KKE, issued on 8 December 2018, the Comment said, "For the second time within one year (the previous time was on December 15th, 2017 ) China's Embassy in Athens has invited a delegation of the criminal Nazi organization ‘Golden Dawn’ to an event. A related statement was uploaded on the ‘Golden Dawn’ website, stating that a delegation of theirs ‘attended an event with the subject of proposals for the further development of relations between the two countries which took place at the residence of Chinese ambassador Zhang Qiyue’."

The Comment emphasized that the Embassy of the PR of China in this way "whitewashes the Nazi, criminal organization ‘Golden Dawn’, that is responsible for racist and other attacks, murders of immigrants and of the activist Pavlos Fyssas." According to the Comment of "Rizospastis", this stance is in sharp contrast to the sentiments of the Greek people, who fought for the defeat of fascism in Greece and who today stand against the Nazi ‘Golden Dawn’.

A year ago, on 21/12/2017, the KKE had written a letter to the WG of the IMCWP pointing out to the relations of the Embassy of the PR of China with the “Golden Dawn”. In its letter, the KKE had informed the WG parties about the incident where the fascist-Nazi organization “Golden Dawn” had been invited and participated in an event of the Embassy of the PR of China in Athens in mid December 2017. This was disclosed with an illustrated report posted on the web-page of the organization.

The KKE had said, “As our Party has informed you time and again, the fascist organization ‘Golden Dawn’, that does not hide its admiration for Nazi Germany and for the military dictatorship in Greece, is responsible for murdering people, such as the antifascist musician P.Fyssas (2013), for murdering several immigrants, for murderous attacks against trade-unionists of the KKE and of the All-Workers Militant Front (PAME), for racist attacks et al. Golden Dawn’s ideology is the so called ‘national socialism’, a criminal ideology, whereas following the lead of the Nazis, they have organized “assault squads” that lash out against immigrants, trade-unionists, antifascists, communists etc. (we attach to the present letter photographs of its activity).”

The letter mentioned the judicial procedure against the cadres of the criminal fascist organization, including its leaders and MPs who had been charged with these crimes. According to the letter, the Greek Parliament had even stopped financing the “Golden Dawn” following a court ruling. It was remarked in the letter that “there is no political party in Greece that continues holding relations with ‘Golden Dawn’, whereas the President of the Republic does not invite representatives of this organization in official events or meetings.”

Under such circumstances, the invitation of the “Golden Dawn” to an event organized by the Embassy of the PR of China in Athens, meaning “an invitation by the Embassy of a country where the Communist Party of China is the ruling party, and also a party member of the Working Group of the IMCWP”, was named by the KKE as ”a grave error and constitutes a provocation and affront to the Greek people, that has combated fascism and has shed rivers of blood fighting against it. ”