KKE on the agreement between Greece - FYROM 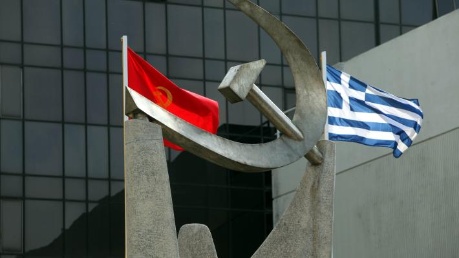 Communist Party of Greece (KKE) released a statement on the recent agreement between the governments of Greece and Former Yugoslav Republic of Macedonia (FYROM).

After years of dispute over the name of the Former Yugoslav Republic of Macedonia, governments of Greece and FYROM signed an agreement on June 17, deciding on the latter’s new name as “Northern Macedonia”. Talks that were being held since February between the two governments are closely associated with membership of FYROM to NATO and the EU, under reconciliaton of the UN as membership of Macedonia is contiungly rejected by Greece since the status of Macedonia was determined as “prospective member” in 2005. However, crisis seems to continue as the agreement is vetoed by the president of FYROM. Moreover, the recent negotiations caused a great unrest among the Greek people. On February, a mass rally organized by right-wing political parties including neo-nazi Golden Dawn Party was held in Athens, with participation of tens of thousands of Greeks stating “Macedonia is Greece”.

KKE on the other hand, insists on remarking the role of imperialism over the recent developments. Since the beginning of the debate in February, KKE has warned the working class of Greece and the region. In a statement it released on February, KKE accused the SYRIZA government of “promoting the participation of the Greek capital in the loot that is taking place in the region through the so-called ‘geostrategic upgrading’ policy”.

See the link for KKE's statement.

With its last statement released on June 14, KKE states that it is a trick that the whole process is focused on the issue of the name of Macedonia. Under the debates over a state’s name, it is silenced that the need of expansion of imperialism  in the region. Most importantly, the statement insists on the fact that imperialist organizations cannot ensure peace and stability, reminding the historical examples of Balkan countries and Turkey. The statement also highlights the support of nationalist forces to SYRIZA government and their will of consolidation of NATO and the EU, although they seem to react negatively towards this agreement. The statement of KKE ends as follows:

“The Communist Party of Greece (ΚΚΕ) calls upon our people and the people of the region to strengthen their solidarity and common struggle against the imperialist plans, against nationalism, against NATO and the EU; now is not the time for complacency, like the one the government is trying to cultivate”.

See the link for KKE's statement.