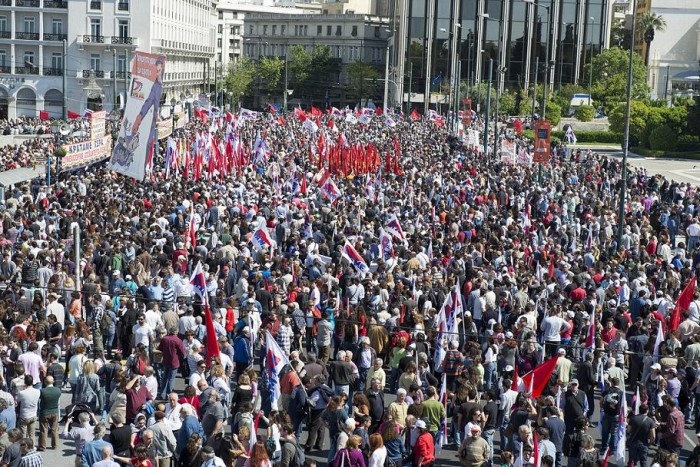 GS of the Communist Party of Greece (KKE) Dimitris Koutsoumbas expressed the determination of the People's Alliance in struggling against austerity measures of SYRIZA government.

Thousands of workers in tens of cities in Greece took their place in the ranks of the rallies to fight against the new austerity policies and the reforms in the social security system that the third memorandum designates in the demonstration on 22nd of October. It is reported that more than 600 trade unions participated in the rallies in more than 50 cities.

General Secretary KKE, Dimitris Koutsoumbas, made a statement in the rally of the All Workers Militant Front (PAME) in Athens, as follows:

"The Greek people have not tested yet their strength. The upcoming measures are too harsh, that is why we need to escalate the struggle and build up peoples’ alliance. The workers, the unemployed, the farmers, their children and spouses should unify so that they can resist and struggle against this cruelty and barbarism."

Koutsoumbas also addressed the demonstrators about the recent floods in Greece:

"With this occasion and because we have a victim and this scenario is being repeated every year as no precautions are taken, we demand immediately all damages to be registered and all losses to be compensated. The government should eventually undertake the substructure works that are urging in the country’."

PAME (All Workers Militant Front), a Trade Union Front founded on the initiative of KKE in 1999, organized the demonstrations against the destruction of Social Security, major cuts in pensions and new taxes to the people.
In an interview held on October 22nd, member of the Political Bureau of CC of KKE, Nikos Sofianos said that the workers were also called on to participate in the general strike planned for November 12th with the main slogans: ‘Enough is enough. We do not accept’.’The government cannot legitimate this hurricane just because the people voted them’.

Sofianos added: "...this government is daring what the previous governments didn’t dare..."