General Secretary of the Communist Party of Greece (KKE): Socialist power is realisable 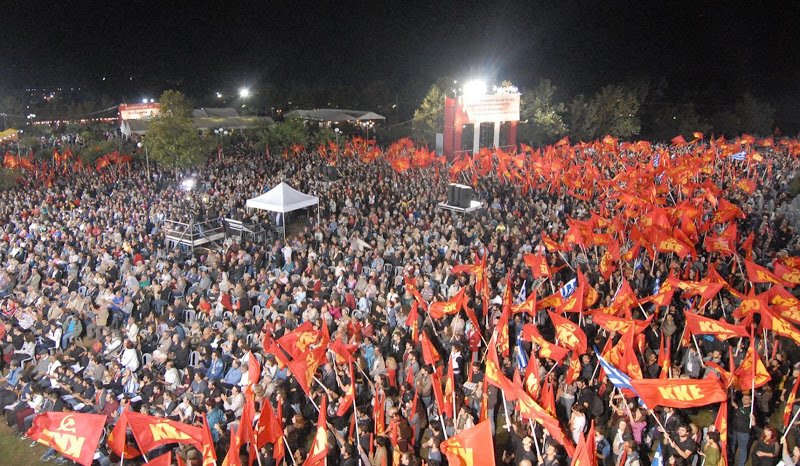 GS Koutsoumpas addressed the youth at 41st Festival of the Communist Youth of Greece calling for a struggle for the construction of a new socialist society.

Koutsoumpas started his speech by condemning the massacre which occurred in Ankara on 10th October:  “We salute the tens of communist and anti-imperialist youth groups that are attending the festival and from this bench we want to condemn the outrageous bomb attack that took place in Ankara today and caused the death of almost a hundred of people and the injury of another hundred. KKE expresses its solidarity to the Turkish working class and people, to the families of the victims. These developments are forcing us to strengthen the alertness and the unification of the people of the region against the bourgeoisie and the imperialists."

In his speech Koutsoumpas stressed the necessity for people to take the power and emphaised that would be something realizable and new for Greek people. He also stated that KKE will take its place in the struggle for power with an anticapitalist-antimonopoly direction by saying:"The KKE participates in the People’s Alliance, which is a social alliance with workers’-people’s power as its political perspective, through its members and cadres who are active in its ranks and organs of struggle.”

General Secretary ended his worlds by calling a struggle for "the overthrow of capitalism and the construction of a new socialist society".

The 41st Festival of KNE

Thousands of young people attended in the 41st Festival of KNE-Odigitis, which was held in the Tritsis park in Athens on 8-10 October. The KNE festival is considered to be the largest political-cultural event in the country.

The slogan of the festival in which representatives of dozens of communist youth organisations participated was the lines of the Turkish communist poet Nazım Hikmet:

“We have a centuries-old impetus… We will emerge victorious even if our sacrifices are great.”.

Throughout the festival various concerts, performances and activities were organised in every area of the festival ground for three days. Discussions were held on a wide variety of issues regarding the lives of both Greek and world youth.

The foreign delegations of the youth organisations visited the headquarters of the CC of the KKE and attended a briefing on the current developments in Greece and the political activity of the KKE and a seminar with the title “Imperialist unions, inter-imperialist competition and the stance of the communists.”