French CP’s on warmongering in Syria and imperialism 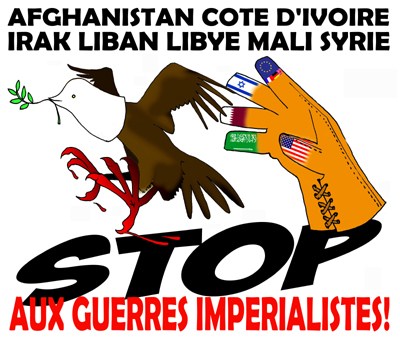 French CP’s has recently made declarations on the warmongering of the French media and the government in Syria and condemned the plans of the imperialist countries in this country.

Three French CP’s, Communist Revolutionary Party of France (PCRF), Revolutionary Party-Communists (PRC) and Pole of the Communist Rebirth in France (PRCF), made declarations on the warmongering of the French government in Syria following the attacks in Eastern Ghouta and condemned the stance of the imperialist countries on this country. Images and ‘information’ obtained from ‘activists’ who move in concert with around 10 thousand militants from different groups in Eastern Ghouta have been being utilized in international media to make an impression that the war is between the people of Eastern Ghouta and the Assad regime, while the aim of the intended international pressure is to cause the militarily powerful Damascus administration to step back.

PCRF, in its declaration entitled ‘With Syrian people against French imperialism’, has stated that a new media campaign has been initiated on the war in Syria, which ignores Turkey’s close relationship with ‘democratic Syrian forces’ in the country, the USA attacks to the Syrian army, the airstrikes of Israel. PCRF underlines that this is ‘a brainwashing campaign led by the communication agencies, in liaison with the sponsors of the jihadist and salafist networks, which are, in particular, France, the US and the UK, Qatar and Saudi Arabia’.

The party mentions that the aim of the campaign is to ‘justify the military interventions of imperialist countries by mobilizing the public opinion on the so-called human rights, which does not exist, violations’.  The party states that the people of Goutha suffer but questions the reasons behind. PCRF concludes that the French working class must be against the whole of the politics of the monopolist capitalism, embodied in Emmanuel Macron, and the party reaffirms its solidarity with the Syrian Communist Party.

PRC, in its declaration entitled ‘Syria: An imperialist war’, has stated that tragic events come one after another in Syria at the war desired and supported by the imperialist powers. It is mentioned that the attacks are against a sovereign state that is targeted to be split up in order to establish a new balance of power in the region.

PRCF, in its declaration entitled ‘Syria: When the imperialist pyromaniacs warmonger again’, states that “while Turkey, thanks to the German tanks and the support of the NATO, crushes Afrin since several weeks, that Saudi Arabia exterminates women and the children of Yemen with the arms, of which some are delivered by France, the French media is only concerned with ‘Ghouta’ in Syria”. It is mentioned that the enclave in Ghouta is ‘majorly controlled by the Islamist militia supported by the West’.