On demonstrations in France on March 22 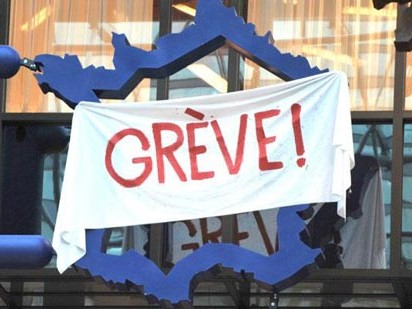 Demonstrations took place all over France on March 22 against President Emmanuel Macron’s ‘reforms’.

Following seven trade union confederations’ decision to go on strike against Macron’s ‘reforms’, workers took to the streets in France on March 22. Trains did not work, flights were cancelled in Parisian airports, and classes were cancelled in many high schools and universities due to the strike. The main reason behind the strike decision was Macron’s plan to dismiss 120 thousand public servants in 5 years. Another reason is the unlawful restrictions on indemnities and leaves of workers. The purchasing power of private and public sector workers in France is declining, while their working hours are getting longer.

In the joint declaration of a dozen organisations including the French Communist Party (PCF) for the demonstrations of 22 March, it is stated that 20 years after an amplified liberalisation in respect to European directives, it is Macron's turn to put an end to the public service in railways, which will result in dramatic consequences. The declaration claims that fighting for public service in railways means fighting for equality. While the government tries to show them as scapegoats, it is declared that refugees are indeed the very victims of liberal policies.

Revolutionary Communist Party of France (PCRF), in its declaration entitled "Against the attacks of Macron, the man of monopolies, we organize the counterattack of the labour class and the masses" puts forward that the presidential elections of 2017 granted to the monopolist bourgeoisie an occasion for a general offensive against proletariat and popular strata. The mobilisations of March 22 are defined as a step forward towards a converged and coordinated action against all politics of the government as a whole. The party stresses, "the EU, the sold-out European Trade Union Confederation (ETUC) must be got away by making our trade unions becoming members of the World Federation of Trade Unions (WFTO) in order to construct the unity of the European proletariat against the common enemy: The monopolist capital and its European Union". PCRF also calls for all workers and youth to join them "in order to construct the Revolutionary Communist Party which is necessary for the overthrow of capitalism that will lead to the realization of a State of the working class."

Pole of Communist Renaissance in France (PRCF) calls for the convergence of the struggles on March 22 in its declaration. It is asserted that even the number of various struggles (salary, employment, public services, health, ...) shows the way of the victory. PRCF calls for the generalisation of the struggle and the strike, for the rejection of all counter-reforms and prescriptions of the "apprentice dictator" Macron. The declaration continues with calls for France's disintegration from the EU, "peoples' prison directed by Berlin", and from the "war machine" NATO for a renaissance with "a revolutionary rupture from the inhuman capitalist system".