CP of Ukraine shows commitment to the cause 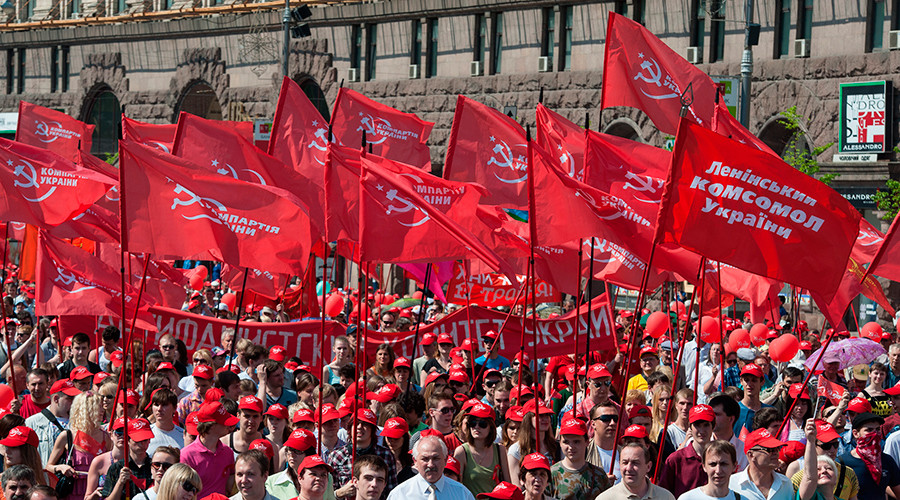 Communist Party of Ukraine released a statement after the Kiev Court banned all its activities.

The Kiev District Administrative Court, ruled for the Ukranian Ministry of Justice that had filed a lawsuit in 2014 requesting a ban on all activities of the Communist Party in Ukraine. The lawsuit accused the Communist party of actions aimed at “amending the constitutional order by force, violation of the sovereignty and territorial integrity of Ukraine, propaganda of war, violence, incitement of ethnic hatred, encroachment on human rights and freedoms".

The Ukrainian Justice Minister, Pavel Petrenko, had signed a decree banning all communist parties from participating in the elections of the country, following the de-communization law signed by Ukrainian President Petro Poroshenko.

Besides these developments Ukraine’s Parliament passed a law which equated communism and Nazism, banning both regimes and all their symbols in April.

The CPU has released an update statement on the court trails as follows:

Today the Kiev Appeal Administrative Court rejected the appeal of the Communist Party of Ukraine on the negative judgment of the District Administrative Court of Kiev (DACK)on 4 CPU lawsuits against the Ministry of Justice (MoJ) united to 1 case. This judgment has not pending effect and should be implemented directly. It means that DACK as the court of the first instance is free to judge another case - on the CPU ban.

Recall that the first lawsuit against the CPU was filed by the Ministry of Justice in July 2014. This case is failed completely, because all the so-called “evidences” of CPU illegal activities were grossly rigged. The charges against the Communist Party were so absurd that judge Kuzmenko responsible for the case, stated that this process is a politically motivated and disqualified himself. His action was followed by all other judges of the District Administrative Court of Kiev. That recusal led to the transfer of the case to another court which does not have the jurisdiction over such cases. Wrath of the regime was not long in coming – the court premises were searched. Criminal proceedings against judges, including Kuzmenko, were started.

The DACK in the first instance did not review the evidences, did not call any witnesses,

In spring 2015 the new so-called “laws on decommunization” were adopted in Ukraine and came into force. No doubt that these “decommunization laws” are contrary to the current Constitution, international law, the Universal Declaration of Human Rights, the European Convention for the Protection of Human Rights and Fundamental Freedoms, the conclusions of the Venice Commission.

Nevertheless the new law-suit to ban the CPU on the basis of those laws was filed by the MoJ to the DACK.

By a strange coincidence, and the "whims" of the electronic system of distribution of cases among judges, this new case again was "accidentally" distributed to the judge Kuzmenko, which is under the "hood" of the junta - under the criminal proceeding. Moreover the same judge banned two other communist parties this year.

The decision of the MoJ to ban the CPU is based on the conclusions of the so-called independent Commission. This Commission consists of the MoJ officials some of them in direct subordination to the head of the Commission - deputy Minister. CPU representatives were not even informed on the Commission session on the CPU case. We asked in written several times on the concrete inconsistencies of the Program and Statute of the CPU. No answer obtained. In the Commission decision on inconsistency is not any concrete statement just general decision. The lawsuit is not described any analysis of such violations. Just statement that party has not changed the documents.

The regime insists that that the Party should waive its name “communist” and symbols: the star, hammer and sickle - the universally recognized symbols of the world communist movement.

The DACK began hearings and turned to the written procedure to avoid the provision and review of evidences and public discussion on the merits of law and facts. But now just after

To counteract efforts of the MoJ to ban the Party and to defend its rights and interests, CPU submitted 4 lawsuits against the MoJ actions, inactions and acts. The DACK united 4 of them and contrary to the General Procedural Guaranties of the fair trial as well as contrary to the Ukrainian law decided to reject this united law-suit using the so-called written procedure. Today after 6 court hearings Kiev Appeal Administrative Court rejected the appeal of the CPU on decision above. Even arguments of the CPU that those “decommunization laws” are to be reviewed by the Venice Commission and this conclusion is expected by the end of this week did not prevent the court of such judgment. Obviously court was pushed to have such decision prior to the Venice Commission conclusion despite the fact that this conclusion hardly would be positive for the government of Ukraine.

Given these circumstances it’s impossible to talk about the impartiality and objectivity of further court hearings on the suit of the MoJ to ban the CPU.

We are confident that this trial is a politically motivated and is aimed to destroy the Communist Party of Ukraine - the only real opposition to the current regime.

We believe that the regime seeks to ban the Communist Party, since it essentially acts as an opposition political force. The Communist Party opposes the country's external management and transformation of Ukraine into a colony, opposes social policy of genocide imposed by the IMF. Against the freezing of salaries and pensions, against raising tariffs, against thievery and corruption  that raised significantly after the State Department henchmen came to power. In favor of the truth of history and against the fascist society. For that never Hitler's collaborationists does not turn into "heroes" and insulted the memory of Red Army soldiers - winners of fascism."