CP of Turkey in McDonald’s restaurants: ‘United, we win!’ 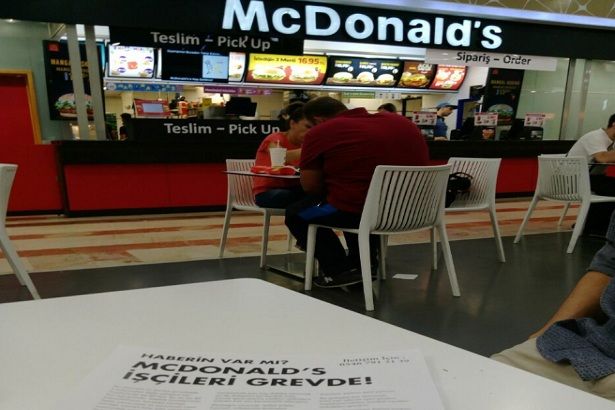 Communist Party of Turkey declared its support for the McDonald’s workers’ strike and distributed leaflets in McDonald’s restaurants in Turkey.

As McDonald’s faces its first strike in Britain, communists in Turkey who have lead struggles against McDonald’s in the past carry the current struggle to Turkey’s McDonald’s workers. Members of the CP of Turkey raided McDonald’s restaurants in İstanbul addressing the workers and customers, ‘Did you hear? McDonald’s workers are on strike!’

The leaflets announced that McDonald's has over 1 million employees throughout the world and 85 thousand of them who work in Britain are on strike. It vocalized the demands of the workers for higher hourly pay, union rights and an end to slavish treatment of bosses.

The leaflet told that  McDonald's workers under these conditions are expected to seem jocund and keep hardworking. They are monitored by cameras and a momentary rest is an excuse to get fired. Meanwhile the bosses record a turnover of 6 billlion dolars. ‘A “smiling service” in front of the kitchen and a cruel exploitation behind...’

Members of the CP of Turkey, distributing the leaflets in McDonald’s restaurants and making speeches, conveyed the call of the communists in Turkey in their 97th anniversary of foundation, to overthrow the system and establish a new one, free from all injustice and exploitation, saying ‘United, we win!’

Member of the CC of the CP of Turkey, Gülçin Uz, explained that every movement of the working class in the world has a reflection in Turkey and the CP of Turkey is embarking on organizing workers in many sectors such as food, textiles, metal and sanitation. The Party founded in 1920 is carrying the historical struggle today with the motto ‘The system will fall, Socialism will prevail’.