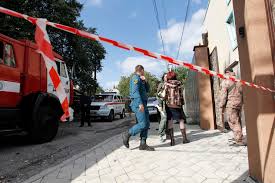 The Political Bureau of the CC of the Communist Party (Italy) issued a statement on 1 October condemning the attack targeting the Communist Party of the Donetsk People's Republic (DPR) wounding three delegates of the party congress that was being held at that time. The statement pointed out that among those injured, Igor Khakimzyanov was 'one of the candidates for president of the DPR after the murder of Zakharchenko in late August'.

The Communist Party (Italy) condemned the terrorist activities against the DPR, the Lugansk People's Republic and the Ukrainian Communists that were 'carried out by the Nazi government of Ukraine with the support of the European Union and NATO'. The statement said 'The deafening silence of the Italian and European media about what happened and what is happening every day in the Donbass testifies to the total subordination of the media to the imperialistic plans of big capital in this region'.

The CP, Italy declared that it whould keep on following the events in the Donbass, publicizing them and condemning not only the Nazis and their bombs, but also those in Italy who 'the guise of “democrats” or even “progressists”, on the one hand wink at these murderers and invite them to official visits, but on the other hand, hypocritically and inappropriately use anti-fascism to pursue their goals in the political struggle'. The CP (I) expressed its anti-imperialist, internationalist solidarity to the CP of the DPR in the common struggle against capitalism, for Socialism.