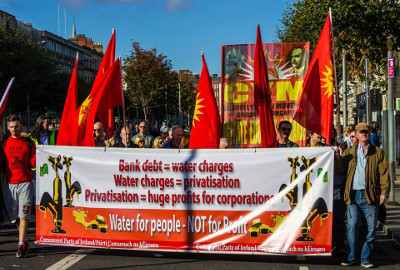 Communist Party of Ireland released a statement demanding a constitutional referendum on people's ownership of water.

Being amongst the supporters of the "Right2Water" campain which works against the water charges and in favour of the rights for the people in Irelan, Communist Party of Ireland (CPI) released a statement demanding a constitutional referendum on people's ownership of water.Working people must continue to push forward on water ownership.

The public release of CPI is as follows

"Working people must continue to push forward on water ownership

The Communist Party of Ireland welcomed today's announcement by Fianna Fail that they would support the holding of a referendum putting public ownership and control of water in the Irish constitution. This follows on from the support announced by the Labour Party. We congratulate the working people of our country who have stood firm and refused to be bullied or forced off the streets.  Their demands were correct and their struggle was a just one.

This announcement is a victory for the continued mobilisation by Right2Water of hundreds of thousands of working people across the country. It is also a victory for those trade unions who put in considerable resources and give strategic organisation and direction to the community based struggles across the country. This consistent and sustained mobilisation made it impossible for the establishment parties to ignore the people's demand for such a constitutional amendment. The CPI congratulates Joan Collins TD and other independent TDs for proposing such an amendment.

The demand for a constitutional referendum on people's ownership was a central demand raised by the Communist Party of Ireland from the very beginning of the water struggle. As a party we campaigned vigorously in support of this democratic demand. This is the first stage in winning this important step toward securing a permanent victory regarding water. The campaign is not over yet – it needs to keep up the pressure until the referendum is called – and carried.

The great struggle around water shows what a mobilised working class, focused with clear objectives, can achieve. Sections of the trade union leadership and some on the left did not believe this was feasible. Working people can take courage from this advance, conscious of their capacity for struggle."
Tweet