Communists in Ireland call for repealing the 8th Amendment against abortion 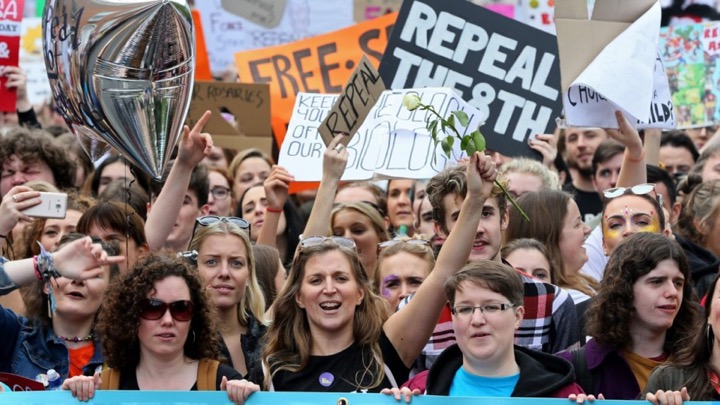 On the May edition of Socialist Voice, the Communist Party of Ireland issued an article on the historical background of the issue. ‘Historically women have been subjected to discriminatory laws in relation to employment, wages, family planning, and now medical access to abortion. This is a legacy of the alliance of a reactionary state, a state created by the victory of counter-revolutionary forces, with the Catholic Church. Women, who played such an important role in the revolutionary decade from 1913 to 1922, had to be driven back, repressed, and controlled—just as the state had to drive the working class and revolutionary forces back so as to cement its victory.’

The article reminded that the Irish establishment consolidated its power under the influence of the Catholic Church which was used as one of the bulwarks in creating the ideological base for the failure of republican principles. Quoting James Connolly’s words “a carnival of reaction” for the partitioning of Ireland, the article pointed out to the reactionary ideology of unionism deeply hostile to women and women’s equality.

According to the Communist Party of Ireland, ‘The repeal of the 8th Amendment will end thirty-five years of a refusal to recognise women and their lived experience. It will mean no longer turning a blind eye to the fact that at least nine women leave this state every day seeking an abortion. ... Over the last thirty-five years more than 100,000 women have been forced to travel abroad, at a huge mental, physical and monetary cost. ... While the right of access to safe and secure abortion is an issue for all women, it is also one that tells the story of a class-divided society. ... For them [the working women] to gather the necessary funds both for travel and to have a termination in Britain, and also to secure the necessary time to do so, has an inordinately discriminatory effect on working-class women.’

For full article see the link.

On the website of the Workers’ Party of Ireland, a call to repeal the 8th Amendment was issued with demands for women. ‘The Workers’ Party recognises that women have the right to control their own bodies, including their fertility, and to pursue all reproductive choices. This is fundamental to any reasonable concept of gender equality in order to achieve full political, social, and economic equality with men’.

The Workers’ Party declared that it rejects the paternalistic attitude that regards women as second class citizens incapable of making their own decisions. The Workers’ Party also declared its support to a full programme of secular sex education for schools, free access to contraception, proper health and social care for pregnant women, the provision of appropriate free and quality child care facilities and adequate support for single and low income parents.

In line with these objectives, the Workers’ Party called to repeal the 8th Amendment of the Constitution, followed by a legislation providing free and full access to abortion and post-abortion care. It also underlined that the repeal of the 8th Amendment will be a red line issue in the programme of the next Government.

In addition, the Workers’ Party called for the implementation without delay of the Action Plan outlined by Frances Fitzgerald on 5th November 2015 when she welcomed the signing of the Istanbul Convention on Preventing and Combating Violence against Women and Domestic Violence and demands the immediate Ratification of the Convention.