Communists on Ankara Massacre: 'You are the experts in killing people!' 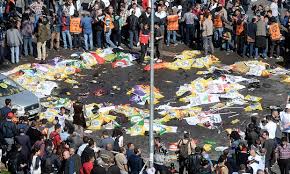 Communist Party, Turkey (KP), released a statement after the 10th October explosionsin Ankara saying: "another massacre has been added today to the imperialist, Zionist and obscurant bloodshed all over Middle East."

Communist Party, Turkey (KP), released a statement after the 10th October explosionsin Ankara saying: "another massacre has been added today to the imperialist, Zionist and obscurant bloodshed all over Middle East."

In the statement  the Central Committee of KP, pointed out the links with this incident with the war in Syria and said:

"The triggermen being the murderers of hundred thousands of people in the war in Syria have been harbouring under AKP government by fleeing through the Turkish border.

Right at this point, enemies of people, fundamentalists and racists are killing tens of people in seconds by explosions.

While the remnants of Islamic State’s murdereous gangs are being harbored in the cities of Turkey by the Turkish police forces, the gang in power, sharia follower AKP, has been attacking with the fear of defeat."

On 10th October, there had been two explosions, which are strongly thought to be suicide bombs.The explosions  killed at least 95 people (it is reported that the numbers may increase as there are lots of injured people in the hospitals). The massacre took place when the demonstrators for the “Peace Meeting” were gathering for the rally near the central train station of Ankara.

The demonstration in Ankara  had been organised by several trade unions and democratic mass organisations supported by political parties, mainly the Kurdish HDP. It was reported that  the Communist Party, Turkey (KP) did not participate the demonstration as a Party entity since they did not agree with the grounds of the demonstration, however some KP members had been assigned to participate within the ranks of the trade-unions to which they are affiliated.

KP has announced that they ordered all its member health workers and lawyers to help the wounded and families.