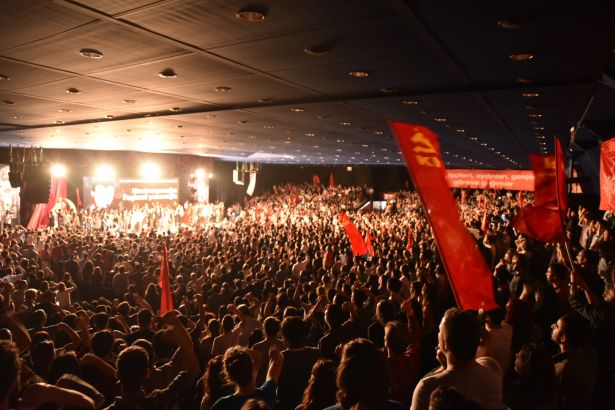 The Communist Party, Turkey (KP) held a mass meeting denouncing the darkness of Erdoğan's fundamentalism and calling for struggle.

Communist Party, Turkey (KP) held a mass meeting against the reactionism and fundamentalism in İstanbul last Sunday.  At the meeting titled "We dare the darkness!", thousands gathered to challenge the reactionary and fundamentalist politics of President Erdoğan and the AKP regime.

The meeting started with the international anthem sang altogether with the novice KP members as well as the senior communists of TKP.

Member of CC of the KP Özlem Şen spoke in the name of the enlightenment movement against fundamentalism, saying they would not allow Turkey to be governed with religious references. Şen, revealed the link between the rising inequality; the killing of tens of people by the bomb attacks; the liberty of the jihadist gangs on the streets of Turkish cities with the increasing religion focus of the Turkish capitalism.

"Our movement against fundamentalism will grow street by street. Our duty is to secure the banner of enlightenment and to carry that banner into our workplaces, neighborhoods. Our duty is to rise into hundred thousands who dare the darkness" concluded Şen.

At the meeting, metal worker Ozan İncedere read the declaration of KP titled "There are workers in this country".

"You ignore us, but there are workers in this country. There is the working class. We are present. The truth is stronger than the lies. The truth beat the bosses." said the declaration.

Giorgos Marinos, member of the PB of the CC of the KKE, also made a speech at the meeting, emphasizing the common path of struggle between the KKE and KP.

"Considering your solid presence among the working class and  your participation and representation at the international communist movement, I think it would be beneficial to proceed your way with your own name and identity as the Communist Party of Turkey (TKP). I felt obliged to express this, yet, I believe you know your way the best" said Marinos and received  excited approval from the KP members.

Giorgos Marinos reminded the recent solidarity action of KKE, which they condemned the persecution in Turkey because of the Erdogan's over two thousand lawsuits, including the ones against dozens of KP members. (See the link for the statement of KKE on the issue)

As the last speech the First Secretary of the CC of KP Kemal Okuyan began his words reminding the facts behind Erdoğan's presence today. "You were all there" said Okuyan pointing the capitalists of Turkey, the EU and US.

"It was only us, the communists who were absent since 2002. It was only us who did not move a step, who always struggled against. They now call us for unity against Erdoğan. We do not trust you, we are on opposite sides. They call us for unity only today. Yet our unity is somewhere else, progressive people do not unite with the capitalists. Our unity is right here in this hall, at the streets in the factories" continued the First Secretary.

Okuyan concluded his words as follows:

"Whatever we do we have to be right, and today every other criteria proves us right in initiating to use the name of the Communist Party of Turkey (TKP). Our organization throughout Turkey, the scale and the political line... We will use this right for sure. We handled a proper partition which started inappropriately in 2014, and we want to act like that as well today. This is also a call to all communists, this is not a call for unification, the unity of the communists can only be achieved with keeping the unique Party."