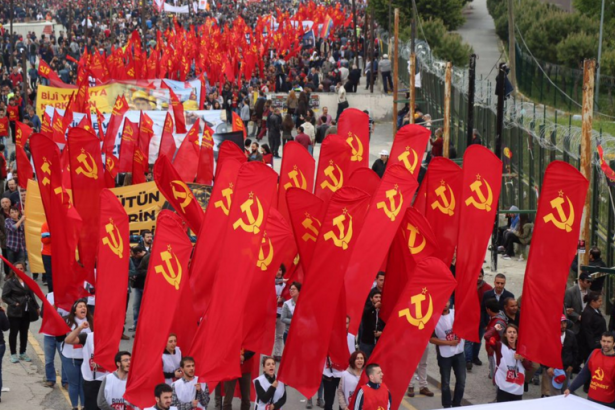 The statement of the Communist Party, Turkey on the issues regarding the coup attempt on 15th July.

The Central Committee of the Communist Party, Turkey released a statement after its gathering on 17th of July where they assessed the latest developments in Turkey deeply and also discussed the state of the Party and its tasks at hand.

The Statement of the Central Committee of the Communist Party, Turkey on July 2016

1.  July 15th coup attempt was not a confrontation  between ideologically conflicting centers , but involved at least two and even more state cliques with identical class identities and ideologies. It is not possible that these cliques would be totally unaware of each other's plans and actions just as it is not possible to tell one clique from the other. However the 15th of July attempt  was not a bloody scenario  planned by Erdoğan as some claimed so. It was a real coup attempt.

2. The process that led to the coup has two dimensions. First is what could be described as the fight for “power” in the general sense between Erdoğan supporters and Gulen movement, which has acquired a new dimension by the widespread purges of Gulenists recently. While the economic and political weight of this fight is increasing, the fight also has an international dimension and imperialist centers are supporting these fractions.

3. That most of the officers who participated in the coup attempt are mostly Gulenists and that Gulen movements has close connections within the US are facts. The thought that a coup will not take place in Turkey without U.S.'s approval as Turkey is a close military partner of U.S. as a NATO member is correct to a large extent. The main reason behind most of high ranking officers of the Turkish Armed Forces who are frustrated with AKP not attempting a coup is due to the support US administration has lent AKP.

4. This support has been reduced recently because of various reasons.Some elements with influence in USA and some European countries, have even started preparing for Erdoğan’s purge. The uprising of the people  in 2013 with the participation of the millions,  the damage on the interests of the system due to the tension created by Erdoğan in large sectors of the society and finally the total fiasco of the Syrian policy deeply effected the relations between Erdoğan and some imperialist countries. It is not possible to consider the 15th July coup attempt without taking into account this tension.

5.  Coup plotters having connection abroad  does not make Erdoğan a patriot or anti-imperialist. As a politician, Erdoğan  has served the interests of the USA and international monopolies. At the moment, as a politician who has lost favor among the forces that had lent him support for years, he is maneuvering, entering into new alliances in an effort to save himself. The fact that Erdoğan is now approaching this or that international axis does not change his class character and his ideological preferences.  Recep Tayyip Erdoğan is a bourgeois politician, he is an enemy of the working class, he is a counter revolutionary and he is no different than the coup plotters who wanted to topple him.

6. The coup attempt,  the powers behind it, the methods used and its ideological basis, do not have anything to do with the interests of the people. The opinion that the country would have  seen better days if the coup had been successful is baseless. It is obvious what a pro-American,  anti-people coup would mean.

7. It is also nonsense to present the suppression of the coupe as a victory for the people and/or celebrate  it is the “festival of democracy” in the tail ofAKP. This is an approach which does not question the legitimacy of the AKP regime and which ignores the class fundamentals of what is going on in the country.

8. The thesis claiming that Erdoğan gained more power after this coup attempt is true to a certain extent. Without doubt, Erdoğan got a chance to inflict a heavy blow to the Gülen Community; got the opportunity to play the victim once again, consolidated his mass base and tested the power of some organizations under his control. However he ended up with a seriously damaged state apparatus and he also had to face the fact that there is not any safe bureaucracy anymore because of the transitory of the integral cliques.

9. Under these circumstances, Erdoğan may try a purge of not only Gulenists but the “Kemalist” elements that he has an alliance with in the two most critical state institutions, Turkish Armed Forces (TSK) and judiciary and rely solely on his own resources. While it may be relatively easier to achieve this in various sectors of the bureaucracy, there are serious challenges in relying on own resources within the military and judiciary. Without engaging in an absolute and final showdown at the social plane,  Erdoğan can not make this move, which would essentially mean an attempt to establish an Islamic state. On the other hand, Erdoğan does not have any other way out for being able to consolidate his own masses under tension.

10. It is also possible that Erdoğan makes an effort to mend the relations with USA and reduce the internal tension after a short period of terror and intimidation and there are already some signals indicating that he is preparing to take those steps. Additionally, the expectations of CHP and HDP are also in this direction. This option is difficult because it is not possible for Erdoğan to continue without politics of escalating tension, clearing the field for his radical elements. Otherwise, the opposition in the Parliament does not actually have any problem with Erdoğan and his AKP.

11. In any case, there is a dissolution and a multi dimensional crisis regarding the hegemony of the capital. It's not this dissolution but the unorganized state of the working class, which is actually dangerous.

12. Another danger is the potential for the belief that Erdoğan is invincible following the coup becoming widespread. This belief is accompanied by “scary” scenarios that spread like a virus and news stories, a large chunk of which are not based on truth, create a state of panic. AKP government has always been dangerous and it is clear that they are even more dangerous now. However the panic environment is helping legitimize AKP's aggression. In fact, neither AKP and  Erdoğan are as strong as claimed nor Turkey is a country whose future can be thrown into darkness over night. For example, in the so-called “celebrations” following the coup, despite all the calls, the number of AKP supporters on the streets was a limited one. The correct position is to be aware of the pending danger but not to create the panic, on the contrary, to attempt to utilize the dissolution for the benefit of the working class.

13. AKP and the fundamentalist threat should not be underestimated at all. It is clear that the period that opened with the assertion “Secularism is not under threat” carried the country to the edge of the abyss. However, there is the task of organizing a popular movement that is more potent and more “ready” to face this considerable threat. This task can not be accomplished by whipping up panic after long years of dormancy. That the opposition within the system is crowning its past inaction with the creation of panic now is unacceptable.

14. Under these conditions, the main source of power for AKP and Erdoğan continues to be his opponents in the political system. The political establishment based all its plans on normalizing, transforming and getting AKP to fall in line. The attitude of some politicians who claim to be representatives of “left” in the Parliament is truly remarkable and worrisome.

15. Experiences during and after the 15th July exposed how ruthless the factions within the state can be.  We all watched how the coup plotters knew no limits in cruelty. Then, we witnessed the barbarism of the government. All these can not be handled by the approach of “let them kill one another”. Undetermined number of civilians have been killed and rank and file soldiers who had no idea of what was going on have been lynched. People will ultimately bring to justice the perpetuators of all these lawless actions, lynchings, and torture against suspects and soldiers who had surrendered and the rulers of those two factions who had cooperated together for years but fighting each other now will eventually have to face the justice of the people.

16. It is not correct to explain all these cruelties as a sign of “power”. On the contrary there is  dissolution, fear and confusion on the side of the government. The widespread fear can only be overcome by strong, solid and consistent moves, not by unorganized, foolish actions. And this dissolution can be turned into an opportunity for the people.

17. As we have always emphasized, Turkey can only be liberated by the unified struggle of the working class against the class hegemony presented by dark powers, not as a result of the clashes between dark powers. We refuse all kind of analysis and positions ignoring this reality. It is obvious that Communists will not give credit to quackery of the “victory of democratic powers” and the “cunning” calls to unite everyone against Erdoğan. Among the people who are uttering the words “the victory of democratic power”, are some who are also creating panic with rhetoric of “followers of sharia will cut our heads off” is a testimony to the level of confusion. We repeat: we will never cross paths with the representatives of the capitalist class, USA and NATO supported coups or agents of color revolutions. This wouldn't weaken us. An unorganized working class that is lured by fake solutions is what would weaken us.

18. The scale of the vacuum among the ranks of the people created as a result of the animosity towards organizing must be clear for everyone to see once again in a country where the Gulen movement, gangs in the government, interest groups, hit-men and even the mafia have the ability to act “organized”. We can even go further to say that everyone who is for a classless society free of exploitation has to strive and work together for a state of organization that is persistent, continuous and has a collective mind. Not embarking on this task, legitimizing the inertia and indifference to this point is equivalent to being an enemy of the people. It is a must to strengthen the organization of the class, independent of the religious sects, Gulen movements, capital and imperialist centers. The ones who idolized the apolitical popular reactions, spontaneous mass actions that did not get organized, the ones that turned aimlessness and formlessness into an aim under the rhetoric of “Gezi pluralism” must have hopefully learnt their lesson.

19. The only objective of the Communist Party is to become an independent revolutionary organization that can change the balance of forces in the country by mobilizing during the coups or the reactionary campaigns. In order to achieve this objective all together, our only call to our working people is to mobilize, trusting only their own power and take initiative instead of watching this nightmare unfold.

See the link for German, Arabic and Russian versions of the statement.