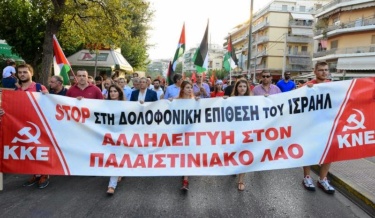 KKE has issued a statement following the solidarity mission of Communist parties that was carried out on the 10-13 of October. KKE also held SYRIZA-ANEl government to account on the grounds of its relationship with Israel.

The Communist Party of Greece (KKE) joined a mission of international solidarity with the Palestinian People, which took place on October 10-13th. Along with the KKE, communist parties from Portugal, South Africa, Germany, Belgium, Cyprus, and India joined the international mission.

The full statement of KKE is as follows:

"The KKE denounces the continuing criminal offensive of the Israeli occupation forces against the Palestinians.

In October, the Israeli military “machine” has been carrying out constant attacks in the occupied Palestinian territories, even using live ammunition, bombing residential areas, carrying out arrests, house demolitions, the closing off of areas etc.

The result of these terrible acts, which aim to subjugate the people of Palestine, is that in just a few days we have 30 fatalities, including many small children, as well as 1400 wounded and the arrest of 700 Palestinians.

The Israeli aggression against the unarmed Palestinian people has once again been supported by the imperialists of the USA and EU.

The SYRIZA-ANEl government bears enormous responsibilities, as it is following the political line of the previous bourgeois governments, upgrading its relations with the criminal state of Israel, even carrying out joint Israeli-Greek military exercises.

The KKE remains consistently at the side of the Palestinian people, as was demonstrated by its participation in the solidarity mission of Communist parties that was carried out on the 10-13 of October.

In this phase it calls on the working class and other popular strata of our country to express their solidarity even more dynamically with the just struggle of the Palestinian people for an independent and sustainable country with East Jerusalem as its capital, without the wall of shame, without the barbaric Israeli occupation."