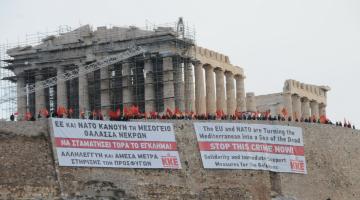 Greek communists raised giant banners on the walls of Acropolis in Athens condemning the crimes of NATO and EU in the recent refugee crisis in the Mediterranean.

In the early hours of today, Communist Party of Greece (KKE) and Communist Youth of Greece (KNE) members raised two giant banners on the walls of Acropolis which read: