A century of struggle and sacrifice 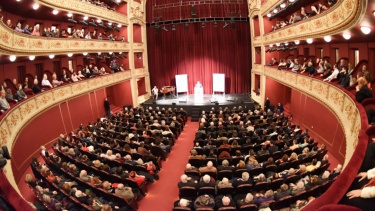 The Central Committee of the KKE organized a political activity with the slogan "A century of struggle and sacrifice, the KKE in the vanguard" last night in the Pireaus, which is known as the workers' city. The activity was dedicated to the 100 years since KKE's founding.

The Socialist Labour Party of Greece (SEKE), that soon was renamed to Communist Party of Greece (KKE), had its 1st Founding Congress in November of 1918 in an historical building which is situated only a few blocks away from yesterday's event.

The General Secretary of the CC of the Party, Dimitris Koutsoumbas, presented the Declaration of the CC that was published on Saturday, January 13th.

“We are welcoming you in Piraeus, the city where the KKE was born in 1918, since it is here where the 1st founding Congress of the Socialist Labor Party of Greece (SEKE), which was later renamed into Communist Party of Greece, took place".

We are completing 100 years of struggles and sacrifices, remaining the only actually new party of the Greek society.  Because the KKE is the only party that fights for the definite abolition of the exploitation of man by man.

The Declaration of the CC of the Communist Party of Greece for the Party's 100th anniversary. The Declaration was published and circulated with the weekend edition of "Rizospastis" on 13-14th January 2018.

See the link for  a translated version of the first chapter of the Declaration of the CC of the KKE.