Call from KKE to rise up against anti-people offensive 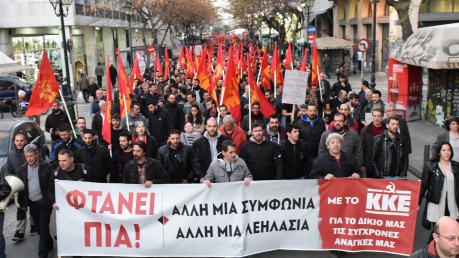 Communist Party of Greece (KKE) organized massive demonstrations all over the country at the time of the Eurogroup meetings.

On 20th March at the time that the Eurogroup meeting was still under way which aimed to finalize the anti-people agreement between the government and the imperialist unions of the EU and IMF, thousands of people responded to the call the Party Organizations of the KKE all over Greece and demonstrated against the old and new anti-worker measures.

A nationwide political activity took place with hundreds of actions of the KKE such as rallies, protests, mass leafletings, visits to workplaces etc that highlighted the need for an escalation of the militancy and for the people to join forces with the KKE against the anti-people offensive and the atmosphere of toleration and passivity being fostered by the government-EU-IMF.

Louiza Razou, member of the PB of the CC of the KKE and Secretary of the Attica Party Organization of the KKE, stressed that the people with their militant inteventions and struggles could achieve to put a spanner in the works of the Eurogroup meetings. She noted that the notorious ‘counter-measures’ advertised by the government are in reality measures and reforms in favour of the business groups and also made a reference to the increasing sharpening of the antagonisms amongst the imperialists. ‘The political line that demands the smashing of labour rights and a cheap labour force behind the factory gates is also the political line that turns our children into cannon in the conditions of imperialist war’ stated Razou.