Ban on Communists' meeting in İstanbul 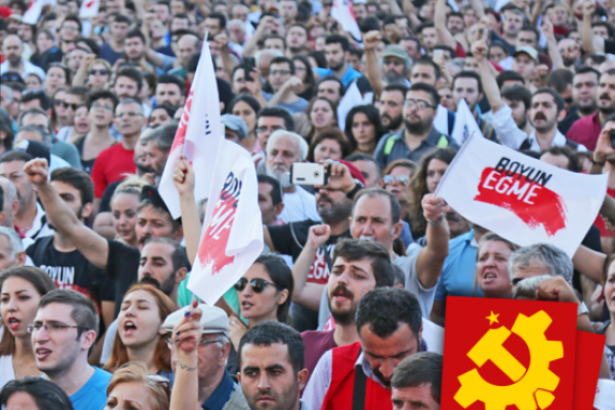 The soLinternational news portal reports that, as Turkey runs up to the constitutional referendum that will be held on April 16, the Justice and Development Party (AKP) government continues to suppress the voice of ‘no’.

While President Recep Tayyip Erdoğan and his party are to hold a referendum meeting on April 8 in İstanbul’s Yenikapı district, taking the advantage of entire governmental authorities and forces, the governorship of İstanbul has banned yet another rally of the Communist Party of Turkey, which is scheduled to be held on April 8 in İstanbul’s Kartal district with the slogan, ‘People Say No’. The governorship previously banned a meeting of the Communist Party of Turkey (TKP), which was to be held on April 2.

The governorship has banned the rally on the grounds of the fact that “two other outdoor meetings will be held in the same day in İstanbul, thus the government will not be able to provide adequate police force for this meeting.”

Upon recent unlawful bans, TKP has made a public declaration: “The Governorship of İstanbul has disallowed the rally of the Communist Party of Turkey that is scheduled to be held on April 8 in İstanbul. The Governorship has conveyed our Party administration that two other meetings other than the rally of TKP will be held in that day in İstanbul, thus there is no adequate police force due to the meetings of AKP and HDP.”

Revealing the unlawful and biased decision of the Turkish Interior Minister, the statement of TKP continues: “The Interior Ministry, therefore, has announced that it will mobilise its all forces to protect Erdoğan in Yenikapı. However, the Communist Party of Turkey does not need any police force to hold a secure and disciplined meeting in Kartal. Indeed, the Governorship has exactly implied, ‘We do not have enough police force to prevent, isolate and intimidate those citizens who will participate your meetings’.”

Indicating that the government imposes bans on referendum activities in order to portray the ‘no’ side of the referendum as “provocateurs”, TKP’s statement says: “Those who also banned an outdoor activity of TKP last week intend to silence the voice of the people. This is yet another scandal during the referendum process which is continuing with complete injustice and biases.”

TKP concludes the statement: “We will not allow President Erdoğan to say ‘They instigate troubles again’ in Yenikapı. We will pursue this incident in terms of laws. We will politically prove once again that they will not be able to silence the voice of the working people.”

TKP has called the people to come together on April 8 across the country to raise the voice of ‘no’ with the Party’s weekly journal, ‘Boyun Eğme’ (‘Do Not Surrender’) with the attendance of thousands of people, trade unionists, intellectuals, artists and academicians.

Upon the ban of the İstanbul Governor for TKP's meeting on Saturday, the Communist Party of Greece (KKE) also made a statement, in solidarity with TKP.

The full statement of KKE is as follows:

The Communist Party of Greece (KKE) keenly protests and denounces categorically the unacceptable, antidemocratic decision of the Turkish authorities to ban the political meeting of the Communist Party of Turkey (TKP) scheduled for Saturday April 8th in the Kartal district of Istanbul, in order to propagate its position if favour of the “No” vote in the Referendum to of April 16th, which is an inalienable right of the TKP.

This is the second time in a few days that a political meeting of the TKP is banned from the authorities, following the ban of the meeting of the communists on April 2nd. These take place at a period when repressive measures are on the rise against the political activity of the TKP and the workers’ struggle in Turkey.

The allegations of the Turkish state that the cause of the ban of the political meeting of TKP on April 8th has to do with the inability to allocate police forces in order to guarantee the “security” of the meeting is a pretextual one, since it is well known that the Communist Party of Turkey, as it has stated, does not need police aid in organizing its demonstrations.

The KKE denounces the authoritarian and repressive politics of the Turkish authorities, expresses its full and complete solidarity with the Communist Party of Turkey and underscores that the KKE will stand side by side with the TKP to defend its fundamental right of political action.

HANDS OFF THE COMMUNIST PARTY OF TURKEY!

Besides TKP and KKE, the Communist Party of Poland also issued a statement condeming the political persecution gainst TKP. The statement of CP Poland is as follows:

"Communist Party of Poland condemns all political persecution by the Turkish state authorities against the Communist Paty of Turkey (TKP). There can be no democracy and fair referendum when opposition is being supressed with both legal and violent methods.

We denounce a ban of the demonstration on 8th of April in Istanbul. It is one of the clear signs of rising authoritarism and anti-communist campaign of the Turkish authorities.

Communist Party of Poland expresses its solidarity with the Turkish comrades who struggle for social change in such unfavourable conditions and show persistence and strength in this fight."

The solidarity letter of the Communist Party of Albania is as follows:

"Friends, we share your concerns on the ban against the rally realised due to the opposition of the bourgeois and anti-popular government of Erdogan. Communist Party of Turkey, which is a legitimate party and a direct representative of the working class and the poor strata in the country, has the legal right to demonstrate under the guidance of its political program.
The reason proffered by the government against the TKP’s rally is an artificial and a baleful pretext sabotaging the political activities of the party. On the other hand, these artificial barriers show the fear of the Turkish bourgeois rulers from the revolutionary actions of the Communist Party of Turkey, which each passing day takes more people into its scope with the objective of establishing a more progressive socialist-communist system for the humanity.
Communist Party of Albania, act with solidarity with the Communist Party of Turkey, expecting to overcome the provocations of the bourgeois system and realise the political activity by using all the means and opportunities. Albanian communists, together with the Turkish communists are in a common intense class struggle for socialism and communism.

With fraternal respect,
The Central Committee of the Communist Party of Albania.
Tirana, on April 7, 2017."