‘Unity against imperialist hypocrisy and conspiracies in Syria’ 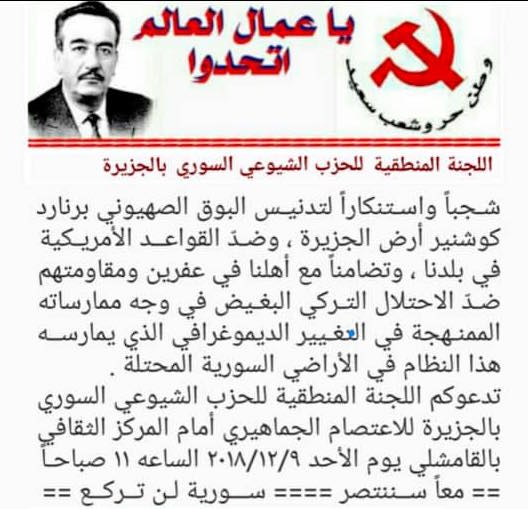 The Syrian CP issued a statement on the invasion of Syrian soil by foreign forces and warned against the conspiracies of imperialists towards the Kurdish people.

The statement issued on 7 December appealed to the patriots of the Syrian homeland to challange imperialism and Zionism. Reminding that Syria has been subjected to Zionist wars for years to undermine Syrian national steadfastness, the statement pointed out that the current imperialist aggression seeks to maintain US influence through the military bases in the east of the Euphrates in violation of Syria’s ‘independence, sovereignty and territorial integrity’. ‘The abominable Turkish occupation is also legitimizing the dark reactionary stronghold on the valuable parts of the land of our homeland in the north of Aleppo’ said the statement.

According to the statement, just as in the Atlantic war on Libya, Syria, Iraq, and Yugoslavia, the former French Foreign Minister Bernard Kouchner ‘sheds crocodile tears on the rights of Kurds in Afrin and other Syrian cities under the slogan of a hypocrite ‘anti-ethnic cleansing and demographic change’. Meanwhile this slogan disregards the global imperialist conspiracies, in particular those of US, British and French imperialism on the rights of the Kurds, also disregarding the historical memory of the region.

The Syrian CP affirmed that the Kurds and their history are a part of the Syrian national fabric attested by their resistance to French colonialism along with all the national forces of the country and later by their resistance to the Zionist attacks in the ranks of the Syrian Army. The statement said, ‘The realization of the cultural rights of Kurdish citizens as the second nation in the formation of our Syrian people will strengthen the unity of our homeland on a democratic basis, strengthen its steadfastness in the face of imperialist aggression, and of the conspiracies.’
The Syrian CP affirmed that the struggle of all the patriots of the country will keep Syria independent.