Syrian CP: Struggle for liberation from the abomination of colonial occupation 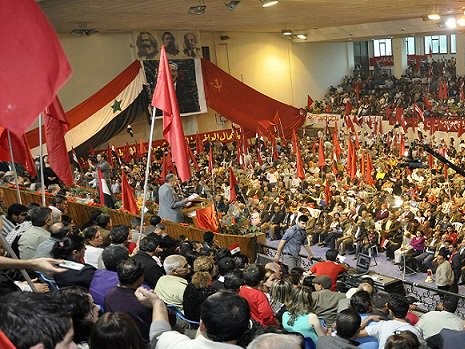 The Syrian Communist Party continues its struggle for national independence, full national sovereignty and unity of the national territory.
ICP, 12 September 2018
The Central Committee of the Syrian Communist Party (SCP) held its periodical meeting on August 3 under the chairmanship of Secretary-General Ammar Bagdache and issued a communiqué. The CC stressed the achievements of the Syrian armed forces which have liberated large areas, including all positions surrounding the capital, Damascus.
Promoting the steadfastness of the resisting people and struggling communists in the occupied areas, the communiqué pointed out the growing popular discontent among masses and indicated practices of the Turkish authorities like demographic change, displacement and imposition of the currency of the occupying power, which are practices prohibited by international treaties. It was also added that American flags were set on fire on many occasions as an expression against American colonists and organizations who cooperate with them.
The CC reiterated its strategy for the current stage:
1. Struggle in defense of national independence.
2. To defend full national sovereignty.
3. Struggle for the unity of national territory.
Calling for vigilance for Zionist and imperialist projects that aim to divide Syria or weaken her unity, the CC stated, "One of the most important means to achieve this supreme national goal is the struggle for the liberation of our entire national territory from the abomination of colonial occupation." The CC expressed its confidence in the persistance of their country as "a major obstacle to the colonial tyranny and expansionist plans of imperialism and Zionism."
According to the Central Committee's evaluation, the restoration of economic and social factors is a must for strengthening the national steadfastness. For the promotion, protection and development of national production, the CC of the SCP called for the substitution of liberal economic policies by a state-led model based on the public sector. Another point was raised regarding the necessity for an anti-corruption process against the parasitic bourgeoisie and bureaucratic bourgeois.
As to the international situation, the CC analyzed, "Many imperialist centers continue to exert pressure on the working masses to eliminate the gains made by the long and stubborn struggle of those who worked in these centers during the twentieth century." and denounced the Zionist Knesset's latest decision that turned Israel into "a state of racial discrimination without any ambiguity."
On the preparations for the 12th Congress of the Party and the upcoming elections for local administrations, the CC referred to a phrase from Comrade Khaled Bagdash, "defending the interests of the people is the essence of the essence of the Communist Party policy."
See the link for full text in Arabic and English.
Tweet