'Struggle in the socioeconomic field is connected to the national struggle' 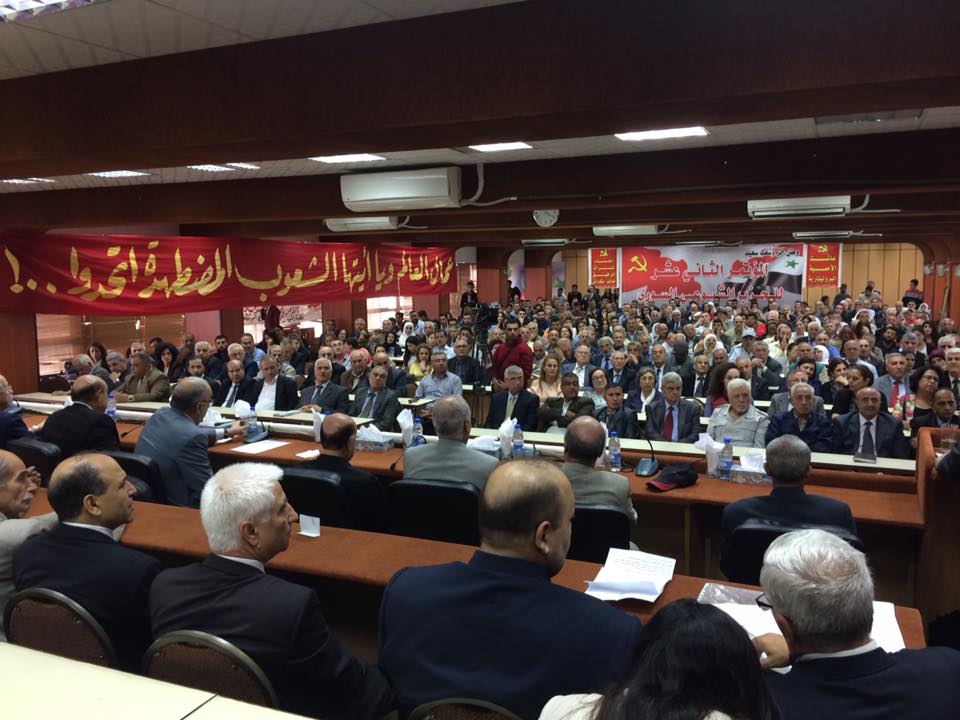 Communiqué of the meeting of the CC of the Syrian CP.
ICP, 22 August 2019
The Central Committee of the Syrian Communist Party held its regular meeting on 20 July 2019, chaired by its Secretary General, comrade Ammar Bagdash.
Examining the global political landscape, the Committee noted increased tensions stemming from the intensification of the contradictions of contemporary capitalism in the temporary absence of a global socialist system. According to the analysis of the Central Committee, US imperialism continues its endeavours to encircle China with a ring of hostile military coalitions formed by its ally and vassal states in South and Southeast Asia as well as Australia. Furthermore, US imperialism has recently intensified its aggressive measures against Iran in collaboration with a number of its European allies, especially the United Kingdom, as well as Zionist Israel. The Central Committee of the Syrian Communist Party denounces the reckless policies of Zionism and imperialism towards Iran, expressing its solidarity with the Iranian people in their defense of the sovereignty of their own state in the face of colonial extortion and conspiracies. The Committee also pays a solidary tribute to the Bolivarian Republic of Venezuela and its friendly people as they fend off the vicious attack carried out by US imperialism and its NATO allies, while also relentlessly struggling against agents of imperialism at the domestic level. The Central Committee also supports the ongoing uprising in Sudan against the obscurantist rule of the Muslim Brotherhood, which has been in power for decades supported by a gruesome machinery of repression. The Committee pays a tribute of comradely solidarity to the Sudanese Communist Party, which is playing a leading role in the mass movement of Sudanese people, struggling tenaciously for democracy and progress. As to the Palestinian issue, the Central Committee views with satisfaction the mass protests against the Manama conference, which promoted the so-called “Deal of the century” - a US project that aims to dissolve the Palestinean cause definitely in favor of global Zionism.
In its analysis, the Party gives a particular place to the aggressive, expansionary role of Turkey, described as "the poisonous claw of NATO in our region." It is explained, "Along the course of the Syrian crisis, significant parts of home soil has fallen under foreign occupation or power, first and foremost US and Turkish ones. Encouraged by the silence, or even the blessing, of numerous international parties, Turkey continues to enforce its administration and regulations over occupied areas. This indicates the intentions of Turkish authorities to keep these areas under occupation in the long term, where native Syrians are already subject to various forms of violence and discrimination. Furthermore, Turkish authorities clearly support the rebel armed organizations, the vast majority of which have a terrorist, obscurantist ideology. This is particularly the case in Idlib, which is now being treated as a Turkish protectorate. Thus, the fierce battles our armed forces are currently fighting against rebel organizations in central and northern west Syria are effectively also battles against the foreign occupation."
The Party denounces colonial plans that aim to create a so-called ‘safe zone’ in northeastern Syria, which aim to ground the occupation of the area by NATO forces. In this regard, the Central Committee stresses that the approach adopted by the so-called ‘Syrian Democratic Forces’ is one that is detrimental to the interests of the Syrian people in general and inhabitants of Al-Jazira area in particular. The Central Committee pays a tribute to all the patriots in areas under temporary colonial occupation, highly appreciating their steadfastness and unwavering commitment to their homeland. The Central Committee also emphasizes the need to resolutely confront the colonial conspiracies which aim to defeat the Syrian patriotic approach through suspicious deals in the form of ‘peaceful concurrence’, which are merely a bid from hostile circles to gain through politics what they have failed to through military action.
Examining the socioeconomic situation, the Central Committee notes the continuously declining standard of living of laboring masses, especially paid workers. The Party deduces that enormous wealth is being accumulated by the parasitic bourgeoisie and war profiteers in particular. In short, society is becoming ever more polarized on a class basis. The Central Committee believes that the reconstruction process should be centered round key productive sectors, namely manufacturing and agricultural rather than service-based luxury projects, which, day after day, prove to be a failure.
The Central Committee stressed that, if preserved, developed and empowered both in productive and basic service (infrastructure and domestic and external trade) fields, the public sector could play a key role in the reconstruction process. The Committee also reiterated the Syrian communists’ firm opposition to subjecting public sector establishments to communion with foreign capital, which is effectively but an equivocal attempt at privatization. The Committee added that, should the door be open in current circumstances to a number of foreign investments from friendly states, these investments should be limited to creating new productive projects rather than handover of already functioning facilities. Generally, the respective experiences of the so-called peripheral countries prove that bringing foreign investments into vital segments of the economy is a curse, not a blessing.

The Central Committee also stressed the importance of the struggle to satisfy public demands, even on the smallest of scales. In this context, the Committee examined the results of the petition calling for wages increase and indexation, a process which should be covered through actual sources of income, i.e. the implementation of a fair taxation system and closing the leaking holes of parasitic profit. The Committee also praised the efforts of party organizations and comrades who took part in this important demand-related endeavor.

The Central Committee emphasized that struggle in the socioeconomic field to defend and advance national production as well as elevate the living standard of the masses is organically connected to the national struggle that aims to defend national independence in the first place, then respectively to defend complete national sovereignty and to provide the absolute and complete unity of home soil.

The Committee concluded by examining the Party’s international activity and the events held in commemoration of the 100th anniversary of the establishment of the Communist International, a key signification of which is the close interconnection between national and international struggles.

See the link for full text in Arabic and English.
Tweet