‘Sri Lankan people have no trust in imperialist powers’ 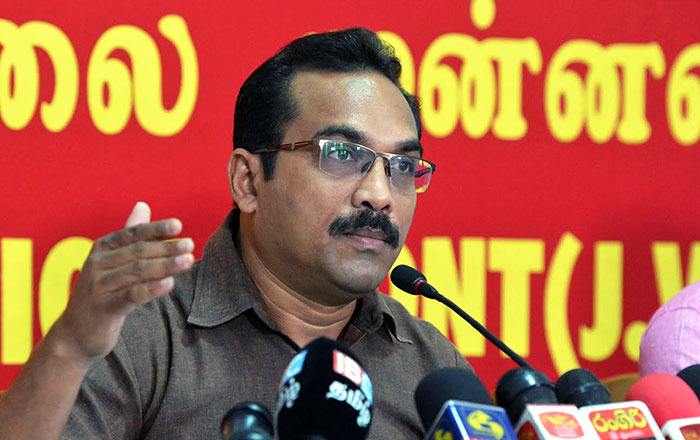 Special interview with Member of PB of the People’s Liberation Front, Bimal Rathnayake on regional imperialist rivalries and the working class movement in Sri Lanka.

While the trade conflict between the US and China intensifies, competition between Asian powers are also escalating. Sri Lanka, one of the countries subjected to rivalries between China, India and USA is experiencing working class protests against recent privatizations alongside religious tensions under the influence of political powers.

A special interview by ICP with Bimal Rathnayake, Member of Political Bureau and National Organizer of Party of Janatha Vimukthi Peramuna (People’s Liberation Front) reveals the economic and military relations of imperialist powers with the country, the political roots of religious tensions and the current situation of the communist movement in Sri Lanka.

How is the relationship of dominant powers in Sri Lanka with India and China? What is the influence of US on their tendencies?

After the independence from UK, Sri Lanka has been governed by two main capitalist parties. The United National Party (UNP) and the Sri Lanka Freedom Party (SLFP). At the beginning, UNP was siding with the UK and the USA, while SLFP was siding with the USSR, China and with India. But after the collapse of the USSR, SLFP also shifted towards the USA. As you know, India has also largely shifted towards the USA. So as per today, there is no different between these two parties. Now both parties are closely working with China and India.

As it is understood, USA is trying to prevent Chinese involvement in Sri Lanka. China has become Sri Lanka’s largest investor since 2005, building two seaports, an airport, highways, a major hydro power station, a coal power plant and the largest reservoir of the last 10 years including a 1.4 billion USD project to build an artificial island at the Colombo Port, called Port City project.

India is involved in Sri Lanka’s economy, but much more in its politics. Its involvement is not as influential as of China in the new economy but it engages very much with daily politics. India has been paying and cultivating political figures in both parties for decades.

USA still has a big influence over Sri Lanka’s economy and politics, even though it’s economic influence has been declining during the last few years. Still, USA is the main importer of Sri Lankan garments. USA signed a military agreement with Sri Lanka –ACSA- [Acquisition and Cross Servicing Agreement] in 2007 which lasted for 10 years and they intend to sign a more powerful one in the near future. USA works closely with India.

What are the conditions of Sri Lankan workers? Do they seek hope from competing imperialist powers in the region for the solution of daily issues?

Sri Lankan workers are not pleased with Indian or Chinese involvement. Moreover, they have anti-Indian and anti-Chinese sentiments as far as economic affairs are concerned. They are aware that China gave billions of money to Sri Lanka with very high commercial interest rates between 6% - 9% causing a lot of corruption and environmental destruction.

At the same time traditionally the majority of Sri Lankans have anti-Indian sentiments for many reasons, mainly due to its hegemonic foreign and economic policies. India proposed to sign a comprehensive economic agreement called ETCA (Economic and Technology Co-operation Agreement) with Sri Lanka and the agreement has been pending for many years due to protests.

But still, the majority believes in the “foreign investment” myth and has a positive opinion of European and Japanese involvement in the economy. But it’s not like as it were 20 years ago. People have no trust on imperialist powers, not because of their sound political knowledge but due to their own experiences.

In recent years we witnessed protests of the Sri Lankan working class against privatizations. What is the current state of this movement?

Our trade union movement and mass movement –to be frank, mainly lead by our party- launched many strong protest campaigns against the privatization of state corporations. One campaign aimed to stop the privatization of a newly built harbor on behalf of China with 15.000 acres of land. After a year long struggle, we lost. But we were able to keep the 15.000 acres of land and amend some very harmful clauses of the contract.

Another case was the privatization of 90 huge oil storage tanks on behalf of India. Sri Lanka has 105 British built oil storage facilites, each tank having a storage of 10.000 tons of oil. This tank farm is situated in the Trincomalee harbor, the world’s second largest natural harbor. In 2003, the government leased 15 tanks to an Indian oil company. Now they want to privatize the rest. But due to heavy trade union strikes including a 3-day complete shutdown of the fuel distribution, we succeded in preserving the tank farm.

An anti-private medical college campaign was also conducted by the student movement, Public Medical Faculty University Teachers’ Federation, parents, doctors, our party and others.  We were able abolish Sri Lanka’s first established private medical college after a self sacrificing 18-month-long struggle which included a complete boycott of one year’s courses by medical students. According to the University Act of Sri Lanka, it’s unlawful to establish private universities, but using the support of the government and big media, a private medical college called SAITM [South Asian Institute of Technology and Medicine] had been established, having a course fee of 100.000 USD.

Yes, we are fighting, but we do have lot of challenges...

How are conflicts between different religious groups in the country?

There are five reasons why Sri Lanka was not able to build a Sri Lankan nation. The first is historical reasons where Sinhala and Tamil kings had fought many wars to control the island, so this mentality of hostility has lasted. Second, the devide and rule policy of the British. Third, the racist political policies of Sinahal, Tamil and Muslim capitalist politicians to win elections. Fourth, the negative influence of the government of India, mainly towards the Sinhala-Tamil conflict. Fifth, the intervention of imperialist powers, after 1990 being mainly the USA. These are the main reasons for the Sinhala -Tamil dispute which resulted in a 30-year-long war.

Concerning the recent attacks against Muslim people…  Sri Lankan Muslims were attacked by Sinhala Buddhists in the first week of March. The attacks targeted mosques, houses and business places. Sinhala Buddhist extremist groups have not been seen in Sri Lanka even during the war. There have been racist politicians but they didn’t have their own organizations. But in 2012, the Sri Lankan government with the help of some politically biased army intelligence officers created a Sinhala Buddhist extreamist group called the BBS [Buddhist Power Force], funded and promoted them. They openly started a hatred speech campaign and a massive campaign to deamonize the Muslim community using some examples of ISIS and some non-inclusive minor characters of the Muslim community in Sri Lanka. Muslims were also attacked by this BBS in 2014.

After the fall of the Rajpaksha government, which was one of the most corrupt, dictatorial, nepotist and racist governments, this tendency of Buddhist racist groups declined. But after 2016, due to the failure of the new regime, the former ruling clique was able to restart their propaganda against Muslims, Tamils, meanwhile spreading every kind of myths. So starting from 2016, we saw the rise of these Buddhist extremist groups again. Even though these organizations are very weak in numbers, they are able to communalize the minds of the majority with the help of the former ruling party politicians and media.

This was the real reason behind the recent attacks on Muslim people. We see this tendency has turned into a political camp now. The former ruling party won the municipal elections, heavily defeating the government. The election was held on the 10th of February and we think that these attacks were very much influenced by the electoral victory.

Could you inform us about the current activities of the communists in Sri Lanka?

Our party’s name is the People’s Liberation Front, Sri Lanka. We are a Marxist-Leninst party practicing bolshevik principals since its inception. But we were not founded or backed by the USSR or China. Our party was established in 1965.

Since 1982 we are the largest and militant Marxist-Leninst party in the country, but due to the proscription of our party between 1971-1977 and 1983-1994, our party was not able to maintain good relations with other parties.

We are strong in the worker’s movement, student movement and also in the farmer movement. People’s Liberation Front has a considerable influence in daily politics as the 3rd national party of the country. Our party has been able to win the hearts and minds of the people as a party of honest politicians and a party who always speaks the truth and is friendly to the people.

We are focused on two aspects. The first is to build a strong disciplined party, so we are recruiting new members and giving them Marxist education and culture. The second is to build an electoral front lead by our party with left democratic social forces, not with political parties but with trade unions, farmer’s unions, artists, university teachers, professionals, environmentalists etc. We have been gaining success in this move during last two years.

Our party which has a big influence over the Sinhala people was unable to stop the recent communal attacks. So we decided to build a political centre, the National Unity, to expose and counter the all kinds of racial and religious extremisms. In these days, we are working on this issue and organizing a big rally where the communal attacks occurred. But we have to do a herculean task.