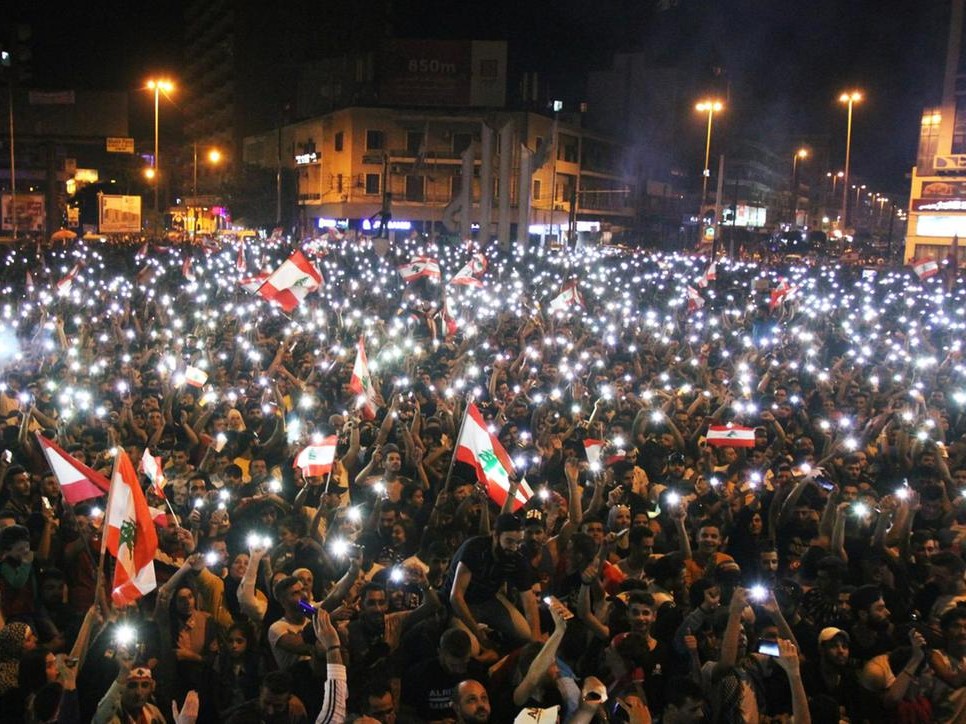 The Lebanese CP encourages the people to escalate the uprising and calls for a general strike to force the government to resign.

The Lebanese Communist Party (LCP) issued a series of declarations regarding the recent uprising, saluting the masses and encouraging its confrontation with the government. The statement issued on 19 October by the Political Bureau of the LCP said, “It is a national uprising throughout the country from the north to the south, passing through the mountains, Beirut and the Bekaa, bypassing sectarian divisions and sectarian affiliations and upholding its rights and demands.” The LCP condemned the attacks and arrests carried out by militias adding that there have been shooting from the bodyguards of some politicians. It expressed that the uprising is “the ideal form to commemorate the party celebrations on the occasion of the ninety-fifth anniversary of its foundation”.

The General Secretary of the Lebanese Communist Party, Hanna Gharib, pointed out in an interview that what is happening in the street is the implementation of the LCP’s decision to change and confront the Cedar Conference representing the pressure of big capitalists on the Lebanese economy through the IMF and WB. "We are still at the beginning and our decision is to continue the escalation,” said Gharib and added, “we will discuss in the party meeting this afternoon to overthrow the political authority and restructure it through an election law outside the sectarian constraint and building a democratic national state.”

The Lebanese Communist Party issued another statement on the 20th of October underlining that the uprising is not limited to the demand to withdraw the draft tax. The statement said that it also includes the demand to change the composition and circulation of power, as well as to change the imposition of social and economic policies. LCP proposed to re-establish the political system in Lebanon, first by achieving the immediate resignation of the government, second, by forming a transitional government to carry out the following tasks;

-       Recovery of the looted public money and the development of a fair tax system that primarily taxes capital gains, interest, rent and wealth,

-       Establishment of all social protection mechanisms to secure the right of retirement, health, transport, housing, environment,

-       Advancement of an alternative national economic vision replacing the policies adopted since 1992 that have been destroying infrastructure networks, especially electricity, expanded unemployment, poverty and brain drain.

The Lebanese Communist Party stressed the necessity of the people in the streets to cooperate and produce joint frameworks that involve organizing and escalating the uprising in Beirut and other regions in order to achieve its objectives.

The Youth and Students Section of the LCP also issued a statement and called for a general strike. Mentioning Prime Minister Saad Hariri’s appeal for 72 hours from the people to prepare a reform paper, the statement warned that such a paper would not meet the people’s aspirations. The statement called the demonstrators to occupy all the country's squares and remain there for the 72nd hour, and let it continue until the government falls. The call of the LCP youth and students included the formation of a national transitional government outside the ruling system.